The Water of Leith rises in north Dunedin and flows 14km through the city. It is a river with the potential to inflict serious damage to property on the floodplain. We manage a flood scheme on the Water of Leith to reduce the risk and impact of flooding.

The largest floods in the Leith typically occur when fronts bringing persistent heavy rainfall pass from east to west over the catchment.

The relatively small and steep catchment can produce significant flooding in just a few hours after the onset of heavy rain, giving little warning. Likewise, the duration of peak flows is also brief.

These characteristics mean the Leith can easily become a raging torrent. The water surface in flood conditions is likely to be highly turbulent throughout most reaches, with large standing waves observed in some locations.

Damaging floods have been recorded in the Leith in 1868, 1877, 1911, 1923 and 1929. The 1929 flood was the most severe on record, with floodwaters sweeping away and damaging bridges and other channel structures, affecting numerous houses and flowing along the streets beyond lower Rattray Street.

With this flood hazard in mind the ORC began works on a flood protection scheme for the Water of Leith; the Leith Flood Protection Scheme is a multi-staged project that has spanned over a decade. It is predominantly funded by targeted Leith scheme rates.

It involves a series of engineering modifications along the length of the Leith, planned to control floodwaters and help reduce the likelihood of it overflowing and spreading throughout the city.

Specifically, the improvements are designed for the lower reaches to cope with a 1-in-100-year flood. This major flood event has an estimated flow rate of 171 cumecs (cubic metres per second).

Improvement works at certain reaches along the Leith have been determined by engineers through hydraulic and computer modelling. These include channel widening, wall heightening or lowering, stream-bed grading and landscaping.

The video below is a physical model built during the development phase of the Union St to Leith walk stage of the project.

How much has the Leith Flood Protection Scheme cost?

To view more information about the Leith Flood Protection Scheme please see the link below: What is Love Your Leith?

Love Your Leith is our community engagement for the Leith Amenity Project. This project is one of the final stages of the Leith Flood Protection Scheme, and aims to enhance the amenity, public access and ecology of the lower reaches of the river, between Forth Street and the harbour mouth.

To find out more about the project and its current stages please visit our Love Your Leith webpage.

Before the 1929 Dunedin flood, concrete and stone walls had already been built along the banks of the river to prevent bank erosion and enable better use of adjoining land. The Otago Harbour Board had constructed a concrete channel from Forth Street to the harbour in 1913-14.

Straight after the 1929 flood the concrete channel was duplicated from Forth Street to the harbour. Concrete and stone walls along the channel were strengthened and raised. In the early 1950s the Dunedin City Council extended the channel upstream of Forth Street. 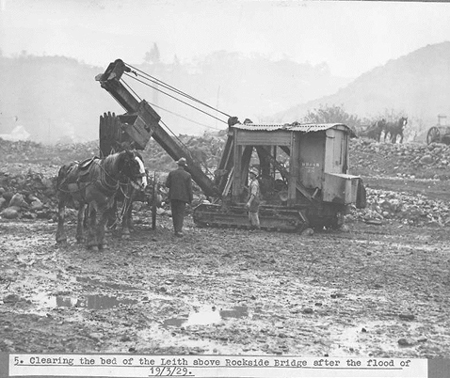 Clearing the Leith riverbed after the flood, 1929 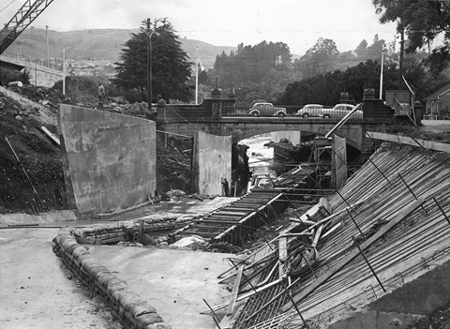