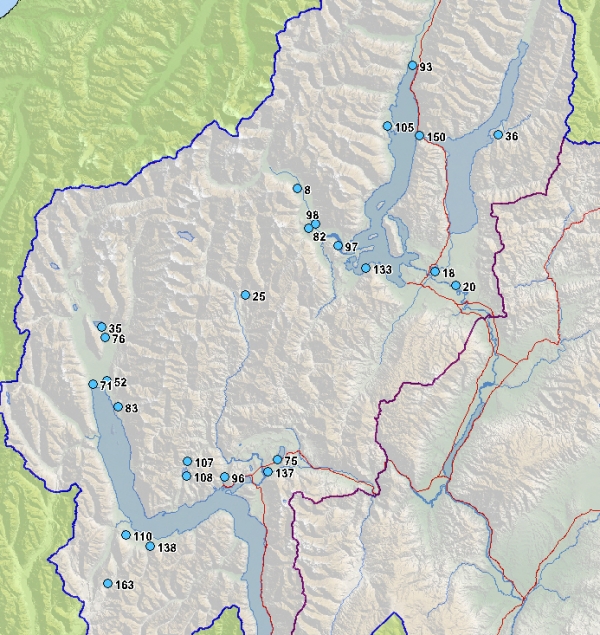 An oxbow wetland formed in an old channel of the Hawea River, downstream of Horseshoe Bend. The wetland is recharged by south-west flowing water from the Hawea River. Read more

Areas of lake edge turf, fen and rushland located around a pond, commonly known as Lake Fyfe or Lake Fife, which lies on post-glacial landforms with a schist bedrock, approximately 150m above the nearby Lake Wakatipu. The lake and surrounding wetland areas presumably formed after water became trapped between the base of a ridge and the large alluvial fan issuing from Little Stoney Creek. Read more

Wetland on the valley floor of the Queenstown Gorge. Leads of standing water and slow moving flow provide permanent internal flow throughout. Located east of the intersection of Gorge Road and Industrial Place, Queenstown. Read more

A large and substantially intact wetland system runs along the foot of the roche moutonnee, at the back of a broad alluvial flat of the Matukituki River. This appears to receive water from both down-slope wash from the large rock bluffs above, and periodic flooding events from the Matukituki River. Read more

The area comprises three remnants of a large wetland system that once covered much of the Matukituki Valley: the West Wanaka Lagoons, the Narrow Spur Wetland and the Broad Spur-Tongue Spur Wetland. Swamps, bogs and open water together represent the largest complex of lowland wetlands in the Lakes Ecological Region. The three wetlands support similar floristic and faunistic values and retain much of their original character. Read more

Scaifes Lagoon is located 2.5 km Northeast of Glendhu Bay, at 280 - 300 m above sea level. Moa gizzards have been found during excavations of this site. The lagoon is an important habitat for waterfowl for breeding, feeding and resting, and has been used by waterfowl hunters for many years. Read more

Wetland located in the Rees River Catchment. Extends from the shores of Diamond Lake towards the east. Located near Glenorchy-Paradise Road, 11 km North of Glenorchy. Read more