Online feedback is now available. Give us your feedback on how land and water in the Dunstan Rohe should be managed. Feedback closes 31 December 2022.

In 2021 we held meetings in the Dunstan area and ran an online survey for the community to tell us what you valued about your lakes, rivers, and streams.

Thank you to all those who attended the community meetings in Lake Hawea on Monday 7 November, Tarras on Tuesday 8 November and in Cromwell on Wednesday 9 November.

ORC has therefore set five Freshwater Management Units (FMUs). As the Clutha/Mata-Au River is the largest in New Zealand, by catchment and volume, the FMU has been further divided into five rohe (areas).

The Dunstan Rohe runs from the outlets of lakes Wānaka, Whakatipu and Hāwea down to Clyde Dam and includes the Kawarau, Nevis, Shotover, Upper Clutha/Mata-au, Hāwea, Cardrona, Arrow, and Lindis Rivers. Many smaller tributaries of the Clutha/Mata-au are also included such as the Lowburn, Amisfeild Burn, Bannock Burn and Luggate Creek.

Outflows of Lakes Wānaka and Whakatipu are unregulated whereas the outflow of Lake Hāwea is controlled by the Hāwea Dam. This rohe also includes Lake Dunstan, a run of river hydro-electricity reservoir created by the Clyde Dam.

Diverse landforms include the rugged Kawarau gorge, tracts of native bush in the remote Shotover catchment to extensive agriculture and fruit-growing areas.

Māori were drawn inland to this area by the mahika kai network, important for transporting people and resources such as pounamu to the coast. The area later supported gold mining and agricultural endeavours, creating a rich cultural heritage of structures and sites.

South of Lake Dunstan, Cromwell is the largest urban centre. The economic focus of the area is largely tourism and agriculture, the latter ranging from internationally recognised viticulture and orchards to sheep and beef farming. 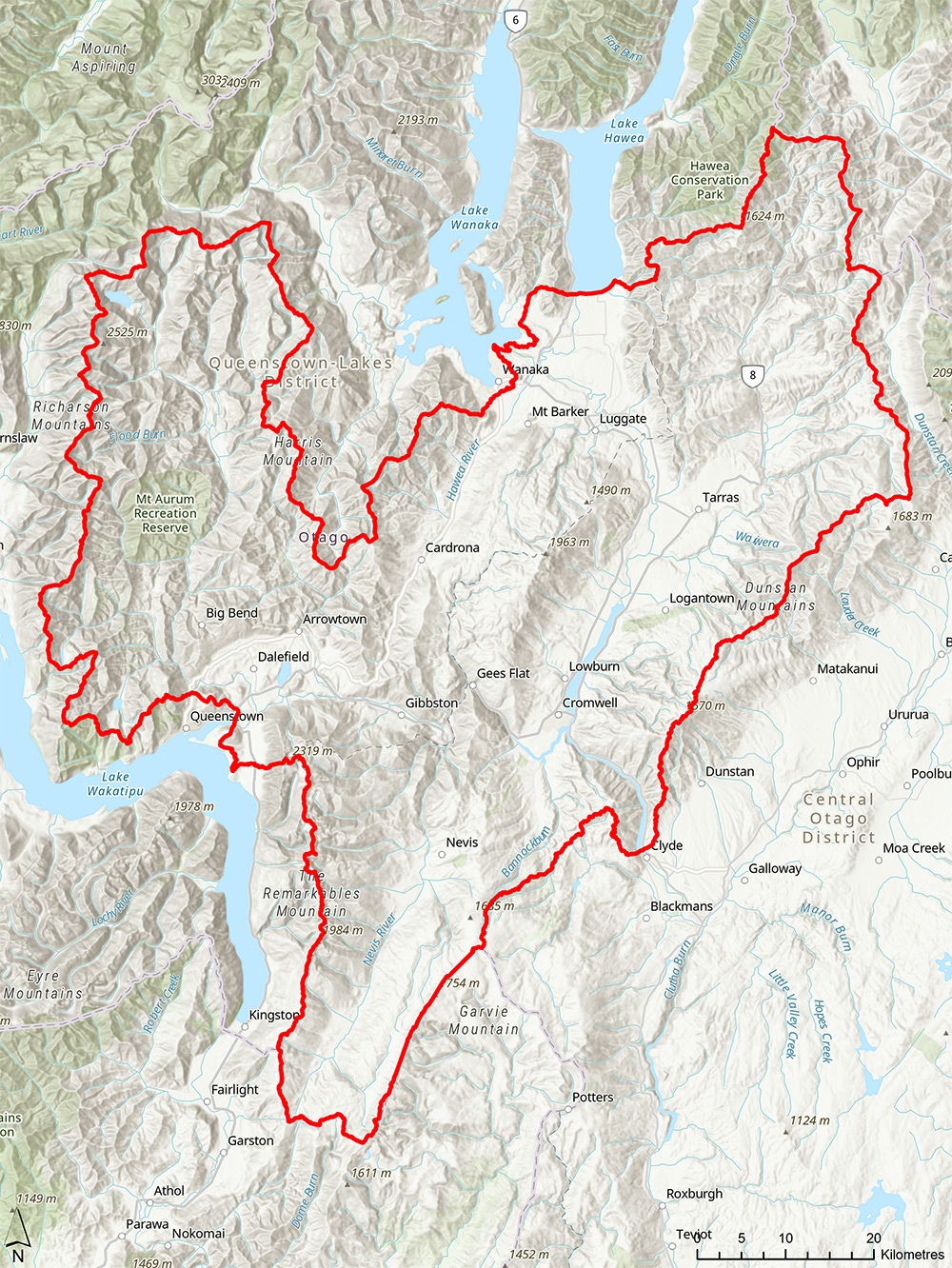 While freshwater policies might be designed and applied specifically to the Dunstan Rohe, their impacts may be felt beyond. Hence the Dunstan Rohe and the neighbouring Upper Lakes Rohe are combined when considering socio-economic information. These communities have close economic ties, i.e., residents are likely to live in one of the areas while working/spending in the other areas.

In 2018, the Upper Lakes Rohe and Dunstan Rohe were home to around 47,400 residents (21% of Otago’s population). In the previous 12 years, the population in these Rohe increased by 19,300 people (or 69%) from 28,000 residents in 2006. This rapid population growth is putting increasing pressure on water use (water takes and discharges of pollutants or contaminants) and its infrastructure. Overall, these Rohe have relatively low social deprivation, when considering factors such as income, home ownership, employment, access to transport and communications, and access to internet.

The local communities and the economy in the Upper Lakes and Dunstan Rohe are especially reliant on water resources. The most populated towns in this Rohe are built around the lakes. Tourism, the most important industry sector in the Rohe, relies on fresh water in some way or form (including snow, which is essential for the ski resorts operating in the Rohe). Agricultural activities, mainly dry stock (incl. deer and with little/no dairy in the Upper Lakes Rohe) and horticulture/viticulture operations, are dependent on freshwater supplies.

Exotic grasslands, primarily for farming, cover 37% of the rohe and 23% is conservation land. Sheep and beef are the dominant farming type (45%), followed by mixed livestock farming including sheep, beef, and deer (15%), and sheep (5%). Dairy, nurseries, vineyards, and orchards occur on 1% of land area.

Notable trends in land use change over the past 30 years have been an increase in conservation estate by 293%, urban development by 108% and nurseries/vineyards/orchards by 33%. Dry-stock farming has decreased by 25%, although still the most common land use in the Dunstan area.

Most frequent soil types are Brown (53%), Pallic (29%) and Semi-arid (11%). Most Brown and Semi-arid soils are moderately or well-drained and permeable. However, in some areas, Brown soils have poor drainage, including parts of the Lindis, Nevis and Luggate catchments. Semi-arid soils extend from the Lindis river catchment down to Bannock Burn. Raw soils occur in 4% of the rohe in alpine rock areas where erosion is active: for example, Centaur peaks and Mount Aurum.

Climate in the Dunstan Rohe is very diverse and includes some of the wettest, driest, warmest, and coldest places in New Zealand. Annual rainfall in the headwaters of the Shotover River is more than 3000mm per year, while in parts of the Upper Clutha Mata-au Valley, rainfall is less than 400mm per year. There is a steep rainfall gradient from west to east, with Shotover headwaters only about 50 km from the low-rainfall Upper Clutha Mata-au area.

Air temperatures from -10oC to 36oC have been recorded in the Upper Clutha Mata-au Valley. Temperatures of less than -10oC are likely in the headwaters of the Shotover River, where it is close to permanent snow and ice.

Very little water is taken from the Shotover and Nevis Rivers, but there is significant water use in the Upper Clutha Mata-au Valley from the Clutha Mata-au river, and the Hāwea and Dunstan lakes. Here, irrigation is the lifeblood of farming, and some streams run dry in summer.

Water quality is generally very good. However, there is pressure on water quality in drier catchments where high water use, or high population growth rates occur. ORC monitors water quality and ecology of rivers and streams. When the results are combined, they can show the health of a river or stream, and long-term data is analysed to show trends in water quality over time. Many sites in this rohe have been monitored by ORC for less than five years, so current water quality state and trends are interim results.

Groundwater has been greatly affected by glacial advances and retreats. These cycles have created several large basins that hold relatively deep gravel aquifers and shallow alluvial ribbon aquifers near rivers and include the Hāwea Basin, Wānaka & Cardrona Basin, Whakatipu Basin, Cromwell Terrace Aquifer, Lower Tarras/Bendigo Aquifer, and the Lowburn Alluvial Aquifer. Groundwater use is high, with around 1,000 completed bores registered with the ORC.

Primary groundwater uses are domestic and stock water, irrigation, community supply, and monitoring. There are around 240 resource consents to draw groundwater in the Dunstan Rohe, with a total annual consented volume of about 89.874 million m3 a year.

ORC monitors groundwater quality in 16 State of the Environment (SoE) bores across the Dunstan Rohe. The results suggest good groundwater quality with low E. coli and nitrate concentrations below the Drinking Water Standards limits in most bores. However, a number of bores including some in Wānaka, the Wakatipu basin, and Lower Tarras, have had elevated E. coli, nitrate, and Dissolved Reactive Phosphorus (DRP) concentrations.

These ecosystems contribute a lot to national biodiversity, however, are often threatened by processes such as land use change and invasive species. Little is often known about their extent and/or condition.

Freshwater invertebrates include koura, mussels, and threatened stoneflies. Threatened freshwater-dependent plants include Chenopodium detestans and Triglochin palustris. Many birds also depend on these ecosystems, temporarily or permanently, including the threatened Australasian crested grebe and black-fronted tern.

Some exotic fishes are found in the Dunstan Rohe, including goldfish, perch and four salmonids. Many native freshwater species are under threat and continue to decline in numbers.

Ten sites are recognised as Regionally Significant Wetlands. These are swamp (4 sites), fen (3), marsh (2), and bog (1).

On the delta where the Upper Clutha Mata-au runs into Lake Dunstan, the Bendigo Wetland (244 hectares) has developed swampy, willow-edged river margins. This wetland provides a habitat for diverse wildlife, and is especially valuable for birds and angling.

Further upstream, above Luggate, the Campbells Reserve Pond Margins (1 hectare) is a small marsh, spring-fed from seepage off the terraces above. Butterfield Wetland (2 hectares), on an old Hawea River terrace, is of similar origin, with a raupo-edged pond.

At the head of the Nevis, in its Roaring Lion catchment, is New Zealand’s largest string bog system, which also extends into the Nokomai catchment, Southland. This system combines terraced tarns, fens, bogs, and snowbanks. In the Queenstown area, Lake Hayes Margins (17 hectares) has lake fringes of raupo, crack- and grey-willows, and some carex swamp.

Moke Creek Swamp (1 hectares) and Moke Lake Bog (12 hectares) have both bog and swamp types. In one of the heads of the Shotover, the Polnoon, the Church Hill Wetland Complex (103 hectares) occupies a fault-derived basin with glacial moraines, bogs, fens, tarns, and ephemeral wetlands.

Two additional sites are Queenstown Hill; a Conservation Covenant-protected site of cushion bog and tarn communities; and the head of Pisa Range Roaring Meg, with sedge and cushion bogs and tarns.