Online feedback is now available. Give us your feedback on how land and water in the Upper Lakes Rohe should be managed. Feedback closes 31 December 2022.

In 2021 we held meetings in the Upper Lakes area and ran an online survey for the community to tell us what you valued about your lakes, rivers, and streams.

Thank you to all those who attended the community meetings in Queenstown on Monday 31 October and in Wānaka on Tuesday 1 November.

ORC has therefore set five Freshwater Management Units (FMUs). As the Clutha/Mata-Au River is the largest in New Zealand, by catchment and volume, the FMU has been further divided into five rohe (areas).

The Upper Lakes Rohe covers the lakes of Whakatipu, Wānaka and Hāwea, from their tributaries to their outlets and is around 7,000 square kilometres.

Catchments include the Greenstone, Dart, and Rees Rivers, the Makarora and Matukituki, and Hunter Rivers, along with several smaller tributaries to the lakes, including Bullock Creek, Minaret Burn, Timaru River, and the Von and Locky Rivers. The lakes’ upper catchments have very high natural values, extending into Mt Aspiring National Park.

The lakes have deep spiritual significance for Kāi Tahu, associated with their creation traditions and their importance as a source of freshwater with high levels of purity. Historically, they supported permanent and seasonal settlements and plentiful mahika kai. Pounamu was also gathered near the head of Lake Wānaka, and the Dart and Routeburn Valleys. 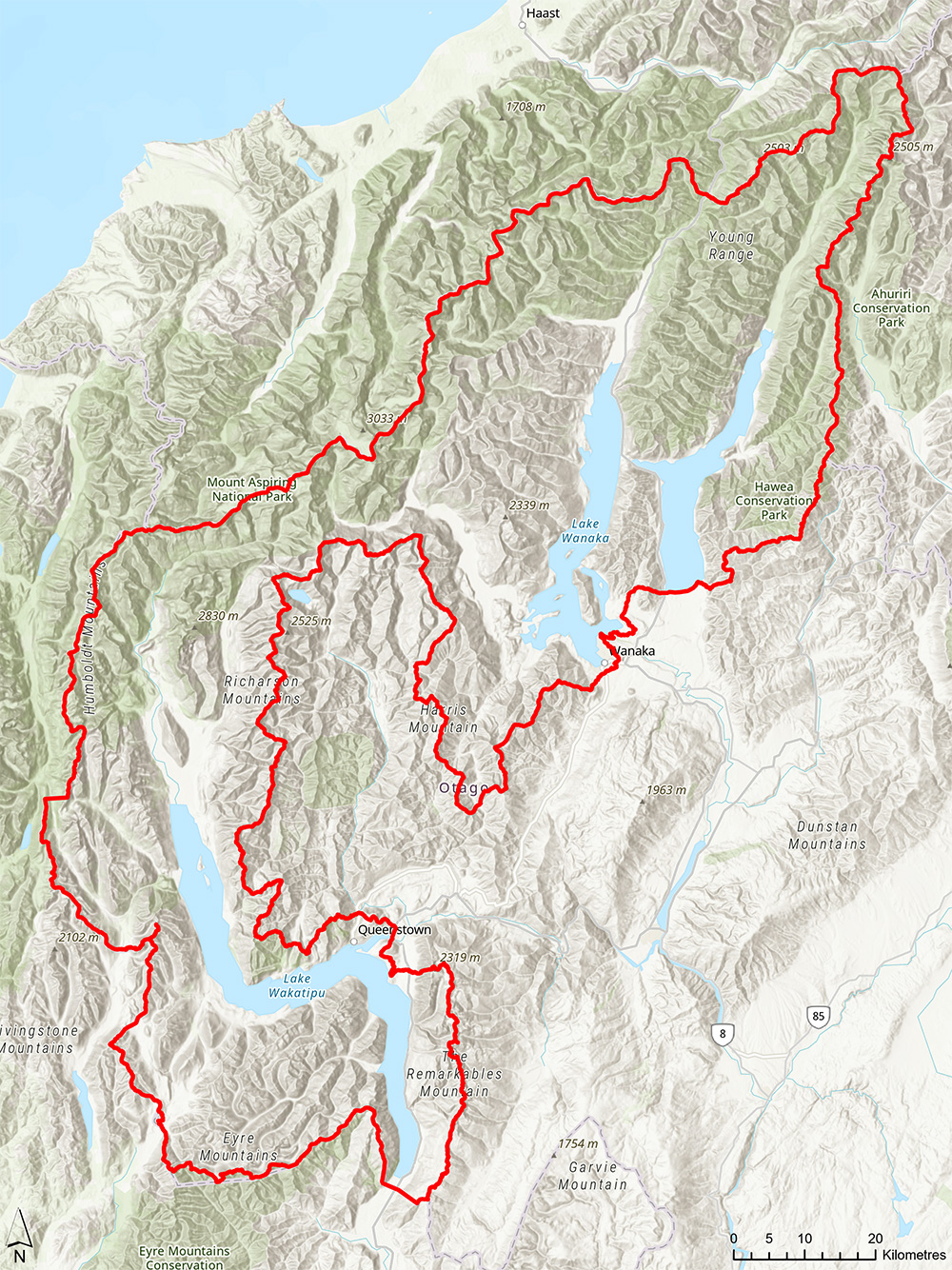 While freshwater policies might be designed and applied specifically to the Upper Lakes Rohe, their impacts may be felt beyond. Hence the Upper Lakes Rohe and the neighbouring Dunstan Rohe are combined when considering socio-economic information. These communities have close economic ties, i.e., residents are likely to live in one of the areas while working/spending in the other areas.

In 2018, the Upper Lakes Rohe and Dunstan Rohe were home to around 47,400 residents (21% of Otago’s population). In the previous 12 years, the population in these Rohe increased by 19,300 people (or 69%) from 28,000 residents in 2006. This rapid population growth is putting increasing pressure on water use (water takes and discharges of pollutants or contaminants) and its infrastructure. Overall, these Rohe have relatively low social deprivation, when considering factors such as income, home ownership, employment, access to transport and communications, and access to internet.

The local communities and the economy in the Upper Lakes and Dunstan Rohe are especially reliant on water resources. The most populated towns in this Rohe are built around the lakes. Tourism, the most important industry sector in the Rohe, relies on fresh water in some way or form (including snow, which is essential for the ski resorts operating in the Rohe). Agricultural activities, mainly dry stock (incl. deer and with little/no dairy in the Upper Lakes Rohe) and horticulture/viticulture operations, are dependent on freshwater supplies.

The Upper Lakes Rohe (area) is home to the headwaters of the Clutha/Mata-au catchment, the largest catchment by area and water volume in New Zealand. It contains glacial lakes Wānaka, Hāwea and Whakatipu, their tributaries, the Southern Alps to the north and terraced valleys in the south.

Land cover is largely tussock grasslands, followed by indigenous forests and gravel/rock. Primary soil type is brown soil, with raw and podzol soils accounting for a further quarter of the Upper Lakes, in the north along the Southern Alps. Brown soils are well-drained and ideal for forests and both native and exotic grasslands. High, wet altitudes over schist bedrock have podzol soil, with raw soils found on steep, rocky slopes in the mountains that experience intense erosion.

The Upper Lakes has a steep rainfall gradient and highest precipitation rates occurring in the mountains to the north. These drain to the alpine lakes: significant water reservoirs with higher levels in spring due to snowmelt. The Upper Lakes provides most of the flow to the downstream Clutha/Mata-au catchment.

ORC monitors water flow at six sites within the Upper Lakes, with access to historical records for other sites, as well as sites monitored by NIWA. Hydrological modelling was completed to provide water allocation information for un-monitored rivers and streams. The main water use is non-consumptive hydro-electricity production, followed by water supply with very little irrigation in the area.

ORC monitors water quality and ecology in rivers and streams. When the results are combined, they can show the state of the environment for a location. Water quality in the Upper Lakes is monitored at 23 river/stream sites and three lakes while ecological monitoring is undertaken at nine river sites and nine lake sites.

Monitoring results show that water quality in the Upper Lakes is the best in Otago. Only a couple of streams within urban areas experience high E. coli counts due to stormwater runoff and presence of wildfowl in the stream. Although a natural process, clarity is reduced in some of the glacier fed rivers.

The lake monitoring sites at Wānaka, Hāwea and Whakatipu also have excellent water quality results. However, these sites show persistent growth of the introduced algae Lindavia intermedia which produces a glue-like substance called lake snow. Although not harmful to people and animals, it is a nuisance and thrives in lakes with very low nutrient levels such as those in the Upper Lakes area.

Groundwater use in the Upper Lakes is generally low, with most water used for community and domestic supplies. There are two Ground Water Management Zones (GWMZ), composed of shallow alluvial aquifers, located around the townships of Glenorchy and Kingston.

The Upper Lakes has extensive freshwater biodiversity values, including rare and threatened ecosystems and species. Examples of rare and vulnerable ecosystems include ephemeral wetlands, braided rivers, and wetlands.
These ecosystems contribute a lot to national biodiversity, however, are often threatened by processes such as land use change and invasive species. Little is often known about their extent and/or condition.

Many native birds in the area depend on freshwater ecosystems, either as permanent or mobile residents. Threatened birds include Australasian bittern, black-billed gull, blue duck, and Australasian crested grebe. Many plants are freshwater-dependent, including the threatened Brachyscome linearis, Crassula peduncularis, Crassula multicaulis, and Carex strictissima. The introduced sports fishes include brown trout, rainbow trout, and chinook salmon. Many native freshwater species are under threat and continue to decline. Information is often missing at a species level, particularly for freshwater invertebrates, non-vascular plants, and algae.