The changed routes, which apply to the City - Wakari and City - Helensburgh portions of routes 33 and 50, will commence as of Monday 2nd July.

“We were pleased to be able to accommodate the strong feedback we received from the local community in Wakari and Helensburgh” said Cr Michael Deaker, Chairman of the Communications Committee.

“While route and timetable changes are quite a logistical challenge, we have been able to alter these routes without affecting the wider network.”

The remainder of each of the two routes is unchanged – meaning that passengers using the City to Corstorphine end of route 33, or the City to St Clair Park proportion of route 50 are unaffected.

A mailbox drop is underway this week to residents in the Helensburgh/Wakari area including a map of the new routes and the updates to timetables that have resulted. Information is also available: https://www.orc.govt.nz/WakariHelensburghBus

The changes are as follows:

Changes to Route 33 Corstorphine – Wakari (Wakari end)
Instead of running along Centennial Ave and Shetland St, the service will begin at Forresbank Ave before entering Balmacewen Rd via Crichton Street and Lynn St. It will then follow the length of Chapman St, turning into Nairn St then follow Stuart street into the city.

Changes to Route 50 St Clair Park - Helensburgh (Helensburgh end)
Instead of running along Lynn St and Highgate, this service will depart from Tuckett St, via Centennial Ave and Helensburgh Rd, travelling the length of Balmacewen Rd into Maori Hill. The service will then continue into Drivers Rd towards to the city. 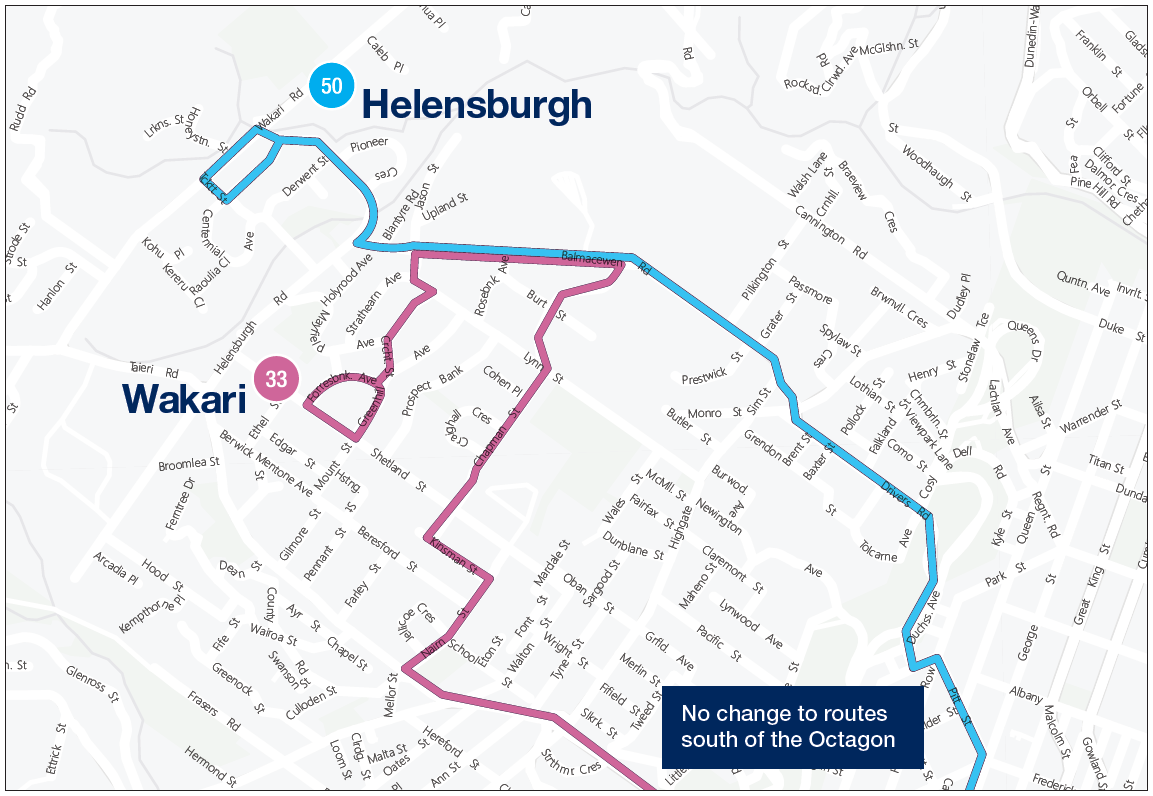 The map shows the Wakari and Helensburgh portion of routes 33 and 50. The City – Corstorphine (33) and City – St Clair Park (50) portions of the routes will not change.

Please find a PDF of the brochure sent to residents attached. >>