Sea Surface Temperature (SST) has been measured daily at Portobello Marine Lab since 1953.

To measure the temperature we use a Perspex tube containing a thermometer. The tube has a rubber flap at the bottom end. When the tube is dipped in the surface water by our jetty, the tube fills up. When we pull it out the flap seals the water inside the tube so we can allow time for the thermometer to stabilise before taking the reading. 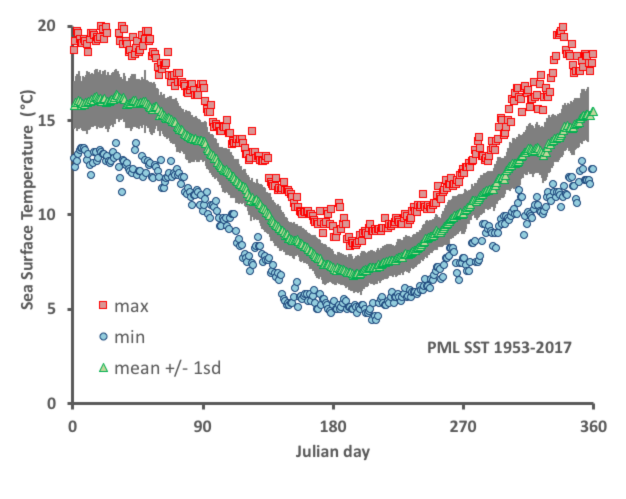 For ease of some calculations we give every day in a year a number from 1 on 1st January to 366 on 31st December (this includes leap years).The first feature that stands out is the regular and (seemingly predictable) curve that means for a given Julian-day of the year, we can take decent guess at the SST. By Julian day I mean a date like 5 November or 14 February.

The green triangles represent the average for each given day. That is, each 5 November is compared only with other 5 Novembers.

The red squares give the maximum ever recorded for a given day, the blue circles are the minimum.

For more detail see a paper by University of Auckland researchers, described in the ODT of 9 November 2017 https://www.odt.co.nz/news/dunedin/warmer-southern-waters-may-affect-fisheries-wildlife