Standing on top of the dunes, shielding our eyes from the bright Dunedin sun (and strong Dunedin wind!) We scan a wide expanse of beach. All is quiet and it appears entirely empty except for a piece of driftwood. As we look at it though, the driftwood moves, chucking sand up into the air! Aha! This is what we’re looking for!

Sunning herself on the quiet beach, the driftwood is actually one of the most endangered sea lions in the world, one that we are lucky to regularly see in Dunedin! With fewer than 12,000 New Zealand sea lions (Whakahao) left they are a “Nationally Critical” species found only in New Zealand, mainly on the Sub-Antarctic Islands, with a small population on the Otago and Southland coasts.

As she continues sunbathing, other visitors arrive on the beach including a family with their children and two dogs on leads. She remains oblivious to their presence as they give her plenty of space, waiting until they have moved 20m past her before running their dogs away from her down the beach. Sea lions come ashore to rest so it’s important that they are left undisturbed when we come across them. They are renowned for being inquisitive and are much more bold and boisterous than their smaller fur seal cousins so giving them plenty of space is especially important when they are awake and active.

As we sit and watch, the female rolls over and flashes us her yellow flipper tag. This tag was given to her as a pup and enables DOC to monitor the sea lion population. In this case we can identify our female as Patti, a native of Dunedin born in 2008/09. As she settles down we see another, small, dark shape behind her… A pup! Patti’s third! It was snuggled beside her and is now looking for some milk which is very fatty and nutritious, ensuring this little pup will grow very quickly. Sea lion mums feed their pups milk for the first few weeks. At about three to five weeks old they start to catch their own food but still drink off mum for a year (sometimes longer!) When this little pup is a bit bigger, he or she will also be tagged and microchipped so we can monitor their progress as they join our growing Otago clan.

So when you’re out and about this summer, keep an eye out for these beautiful native treasures. Remember to give them plenty of space and take some time to watch these incredible animals, you might even spot some of the new youngsters. 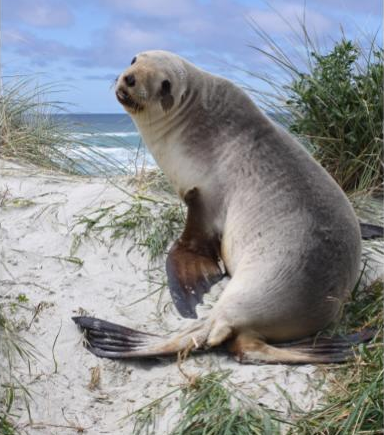