Southern District Health Board (SDHB) and Otago Regional Council (ORC), with support from the Dunedin City Council, have worked together to make the Dunedin Bus Hub officially Smokefree.

Additional larger vape and Smokefree signs will also be affixed in coming days.

Miss Thomas said that while waiting for public transport in the past she had noticed people sitting on the benches and in bus shelters smoking.

“Almost 90% of Dunedin residents are Smokefree, so having a Bus Hub that is free of cigarette smoke and litter may encourage more of our population to use public transport.

“It’s a much more pleasant experience waiting for a bus when you don’t have smoke around or next to you.”

She said that while stickering the Hub with Smokefree signs, people commented positively.

“Parents can also ‘breathe easy’ that they are taking their children to a safe environment, where they won’t be involuntarily exposed to second-hand smoke.”

ORC Transport Team Leader Julian Phillips acknowledged the work Public Health South had done to get all the organisations on board.

Public Health South see this as a significant step in the right direction for meeting the Government’s nationwide goal of Smokefree 2025.

“A lot of people’s behaviour is influenced by societal norms, so showing future generations that the norm is being Smokefree will ideally shape their behaviour in a positive way,” said Miss Thomas.

“Ensuring that children aren’t as exposed to smoking behaviour as well as second-hand smoke is crucial,” said Miss Suratwala.

“Children copy what others do, so it’s important we pave the way to the healthier path for the next generation.”

In making changes to shared community spaces such as the Bus Hub, Public Health South are further encouraging Dunedin’s small great city status and making it one of the world’s most liveable places.

Our final week to win the prize

During July, Orbus and My Little Local are celebrating the partnership by offering bus users the chance to win $2250 worth of prizes. Prizes include vouchers redeemable for product from retailers at the Bus Hub on Great King Street including Farmers, Countdown, Smiths Sports Shoes, Look Sharp Store and F45 Training Gym.

There is one more week left so download the My Little Local app and enter. 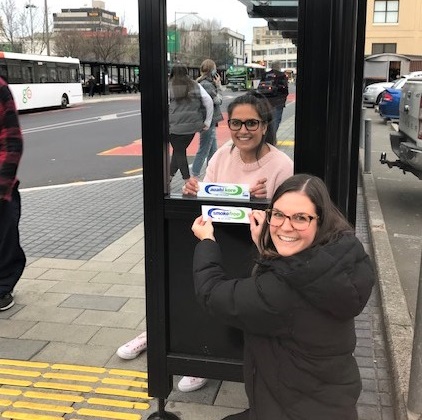 Pictured are Komal Suratwala (at back) and Catherine Thomas, Public Health South Health Promotion Advisors putting up stickers at the Bus Hub.