The Alpine Fault connects two "subduction" margins where the ocean floor descends into the Earth's mantle. At this point the surfaces of the two plates making up the South Islands alpine fault meet.

The Pacific Plate on the easterly area of New Zealand is moving westwards and the Australian Plate, on the western side of New Zealand moves eastwards. They move at a relative rate of about 45mm per year.

As these two plates move against each other enormous pressure builds up which must eventually be released through earth movement: a rupture of the Alpine Fault. Between earthquake events, pressure continually builds at this fracture in New Zealand’s crust, and has been building for over 300 years since it was last released by a large earthquake in 1717 AD.

The Alpine Fault, along with many other active faults, is part of the continuous evolution of the South Island’s mountainous landscape. Our communities must plan to adapt to this hazard and the related events such as slips, rivers breaking their banks and liquefaction which occur with large earthquakes.

This earthquake is a normal part of New Zealand's evolution. We are a young country and learning to adapt to it is a necessity if you and your community are to get through.

The Alpine Fault earthquake will be but one event of many different types of natural hazard events that will occur in New Zealand's future. 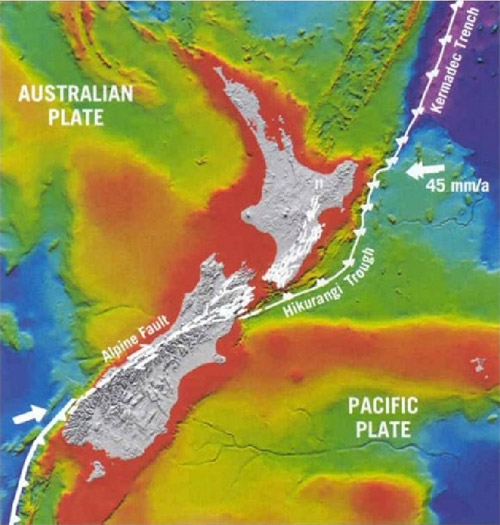 Where will the next earthquake centred on the Alpine Fault begin?

Geologists working on Project AF8 believe that the next severe earthquake on the Alpine Fault is most likely to be a rupture that begins in South Westland and “unzips” northwards and will probably have a magnitude of 8+ on the Richter Scale.

It will be felt throughout the South Island and the lower North Island and as far away as Sydney. The map below indicates the range of the earthquake and its shaking intensity (shown in Roman numerals). 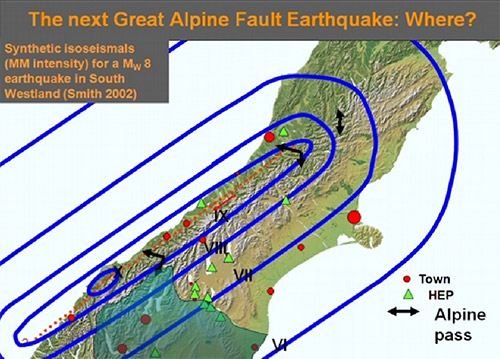 When will the next Alpine Fault earthquake occur?

The historical patterns of earthquakes and current research on the Alpine Fault indicate that it is likely to rupture very soon in geological terms.

A recent study led by Te Herenga Waka – Victoria University of Wellington senior lecturer Dr Jamie Howarth indicates that there is a 75% probability of an Alpine Fault earthquake occurring in the next 50 years. Carbon dating has previously confirmed that the last severe earthquake on the Alpine Fault was in 1717, and analysis of lake sediments deposited by previous earthquakes showing that the Central and South Westland sections of the Alpine Fault have ruptured on a remarkably regular basis, about every 250 years. There is also a 4 out of 5 probability that the next Alpine Fault earthquake will involve multiple sections of this fault line, making it a magnitude 8+ event.

Analysis of sediments deposited by previous Alpine Fault earthquakes shows that the faultline ruptures on a remarkably regular basis, on average at intervals around 300 years. Carbon dating confirms that the last severe earthquake on the Alpine Fault was in 1717. GNS scientists have calculated a 30% likelihood of the fault line rupturing in the next 50 years.

You will find more information about the Alpine Fault, evidence of past earthquakes, and what preparations are being made for a coordinated response across the South Island on the Project AF8 website.

How will it happen?

The length of the rupture will be up to 400 km, eg. on Haast and spreading north to Ahaura. The earthquake will last for about two minutes.

What strength will it be?

With an expected magnitude of 8+ this will be considered a "great earthquake" not simply a strong one. In some places the force will result in a horizontal earth shift of up to 8 metres, and a vertical displacement of 4 metres. The effects will be worst in West Otago, diminishing eastward.

Significant building damage can be expected in the Queenstown Lakes District. Damage in other parts of Otago will be irregularly distributed depending on the land forms and the built environment.

If you would like to know more, there are a series of short presentations by scientists who have been researching the Alpine Fault and the impacts of the next rupture. www.youtube.com/channel/UC3nsXLqxO5OGcYCmEcS56sA

What will happen to the earth during the earthquake?

The effects will be amplified in South Island mountainous regions and high country where enormous damage can occur to peaks and ridges. Countless landslides can be expected of all sizes. In areas where the magnitude is plus or minus 9, many tens of millions of cubic metres of rock and scree may collapse from slopes.

Damaging aftershocks are likely to continue for several weeks afterwards and the event will have disastrous consequences across many regions. Less intense shaking from aftershocks will continue for months. There will be liquefaction and widespread ground damage.

What will happen to the rivers and lakes?

Landslide dams with breakout flash flooding are very likely. Aggradation will deposit high sediment volumes in riverbeds lasting for many months. Huge sediment and gravel deposits will have downstream effects for years. Areas such as the Shotover River may be radically transformed.

Rock avalanches falling into the water bodies may cause tsunami in lakes, rivers, and fiords. Areas such as Lakes Wakatipu, Wanaka, Hawea, Te Anau, Manapouri, Tekapo, Milford Sound Doubtful Sound are at risk from tsunami induced by massive landslips into the water. A study released by NIWA in 2018 found evidence of tsunami up to 5m high caused by landslides into Lake Tekapo, which scientists believe will be similar to other large Otago Lakes: www.niwa.co.nz/news/lake-tekapo-study-raises-awareness-of-tsunamis-in-nz-lakes 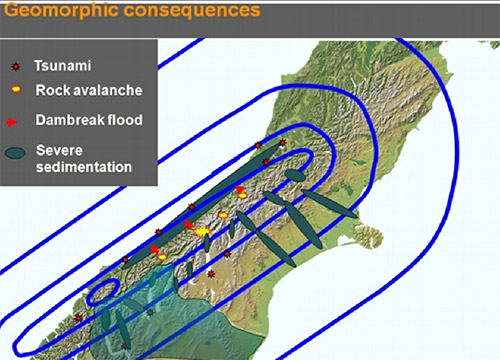 What will the immediate consequences be for our society?

A sudden onset national civil defence emergency of long duration will be called. It is to be expected that medical services and other civil defence emergency services will be overwhelmed and severely inhibited in their rescue efforts by the scale of damage to roads and buildings. Overseas rescue and medical assistance will be required. The nature and location of the earthquake relative to major population centres suggest that a relatively small number of people will be killed. However, a large number of people will suffer disabling injuries. Depending on the time of year, the large number of seasonal visitors in the Queenstown Lakes District and other parts of Otago will be completely reliant on immediate assistance.

Expect many bridges to fail west of Queenstown, Wanaka/Hawea no bridge design performs well during a fault rupture. Many rivers and streams will become impassable. Roads will suffer serious damage, some areas will be become isolated immediately. Transalpine routes and roads in mountainous areas will be impassable for weeks, therefore, tourists and other travellers are likely to be stranded. Any ski-fields that were operating at the time of the rupture will pose severe rescue difficulties.

In the same way that the 2016 Kaikoura earthquake caused massive landslides to block SH1 for over a year, an Alpine Fault rupture will cut road access through the Kawarau Gorge, Kingston to Frankton, Haast Pass and the Glenorchy Road may be cut in many places, mostly by landslides and dropouts. Large sections of SH6 (Haast Highway) may be out for up to a year. Many other roads will be affected. 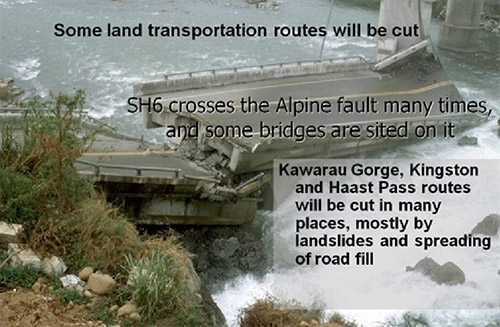 Damage to hydro electrical generation plants and transmission lines will result in an immediate shutdown of South Island power generation and widespread disruption of reticulation. Electricity supply is likely to be unavailable for many weeks or even months in some remote areas.

The Clyde Dam has been built to very high specifications and it is unlikely it would suffer catastrophic damage.

All communication systems including land and cell-phones may be down in many parts of West Otago. Satellite based telephone systems will initially be the main means of communication. The Wakatipu including Queenstown could become completely isolated if the airport is damaged.

Water, sewerage, energy, transport, health, and social services are likely to be disrupted for weeks.

Cessation of most commercial activity may occur in many parts of the South Island, however, many local economies will be maintained solely by recovery activities. As in any disaster some people may suffer terribly, and others will profit.

People trapped on roads and tracks, or in accommodation will need to be looked after where they are for days due to road blockages, airport damage, and limited means of transportation.

Agricultural production will be disrupted, and dairy herds may be unable to be milked in some areas due to electricity outage.

A major problem constraining repair and rebuilding will be the shortage of trades people and materials.

Provision of emergency medical facilities for many major trauma victims and the rescue of trapped people on roads will be severely disrupted for 3-4 weeks. 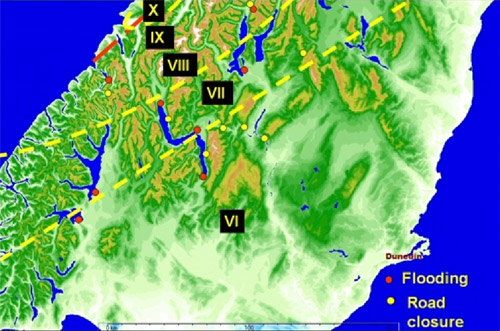 What you can do now to mitigate this catastrophe

Civil Defence Emergency Management Groups across the South Island are working together to plan a coordinated response to the next severe Alpine Fault earthquake. You will find the SAFER Plan for this response on the Project AF8 website www.projectaf8.co.nz

While the direct impact on people, families and businesses will vary, it is certain that normal life will be disrupted for everyone in the South Island for an extended period afterwards. Any actions you take now to be better prepared will make life easier for you and those who rely on you in the aftermath. There is extensive advice on how to be prepared on www.happens.nz and www.otagocdem.govt.nz. Plan to be self-reliant for at least three days – a week or more is realistic. This includes having stored water, food, medical supplies, alternative means of cooking and heating for your household and your pets.

Look at your home, property or business and develop scenarios about the risk factors. Develop a plan about for what you need in order to be prepared. Encourage others to do likewise. Check on the Emergency Management Otago website to see whether the area you live has a community response plan. If not, take the initiative and contact Emergency Management Otago to discuss setting up a local community response group. Email info@otagocdem.govt.nz or phone 0800 474 082