The term landslide describes a wide range of ground movements, such as rockfalls, deep failure of slopes, and shallow debris flows. We hold information on known landslides in the region. 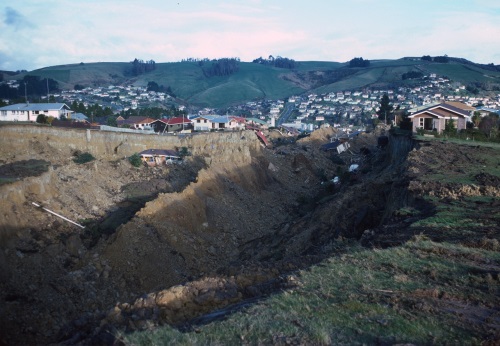 The Otago Natural Hazards Database displays known existing and historically mapped landslides. Areas which may be prone to landslides (due to slope, substrate or other characteristics of the land) are not shown.

Landslides can vary in size from a single boulder in a rock fall to tens of millions of cubic metres of material in a debris avalanche. Landslides do not include ground subsidence, collapse or erosion.

The major types of landslide movement are shown in the following diagram (diagram and information sourced from the US Geological Survey website landslide hazard program).

A rotational slide is one in which the surface of rupture is curved concavely upward and the slide movement is roughly rotational about an axis that is parallel to the ground surface and transverse across the slide.

A translational slide is where the landslide mass moves along a roughly planar surface with little rotation or backward tilting.

A block slide is a type of translational slide in which the moving mass consists of a single unit or a few closely related units that move down slope as a relatively coherent mass.

Falls are abrupt movements of masses of geologic materials, such as rocks and boulders that become detached from steep slopes or cliffs.

Toppling failures are distinguished by the forward rotation of a unit or units about some pivotal point, below or low in the unit, under the actions of gravity and forces exerted by adjacent units or by fluids in cracks.

Lateral spreads usually occur on gentle slopes or flat terrain. The dominant mode of movement is lateral extension accompanied by shear or tensile fractures. The failure is caused by liquefaction, the process whereby saturated, loose sediments with little cohesion (usually sands and silts) are transformed from a solid into a liquefied state. Failure is often triggered by rapid ground motion, such as that experienced during an earthquake.

A range of ‘flowing’ mass movement actions are also shown in the diagram below including debris flow, debris avalanche, earthflow and creep. 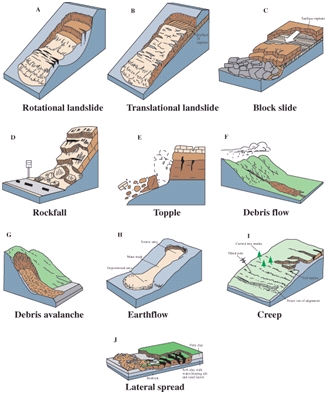 For more information about landslides in Otago go to our technical reports section. A translational slide is where the landslide mass moves along a roughly planar surface with little rotation or backward tilting.