Alexandra conservationist Jolyon Manning’s lifelong passion for, and dedication to, conservation in Otago has been recognised by ORC.

Mr Manning has spent more than five decades as a champion of conservation, biodiversity, and ecological protection. In 1961 he and his wife Enny created Jolendale Park, NZ’s first covenanted semi-arid exotic woodland reserve on six hectares of parkland on top of Alexandra’s Bridge Hill.

Permanently protected in 2004 by the QEII National Trust, Jolendale is home to a wide variety of exotic and native trees and plants, including carefully nurtured remnant native sedges and hardy shrubs, some of which are rare.

In recent years, it has been in the care of a charitable trust after the Mannings gifted the park to the community.

It is rich in specimen trees – from many parts of the world – including snow gums, cedars, nut pines, colourful crabapples, and many more.

“Jolendale is a beautiful example of how planted areas made available for people to relax or stroll through adds value for the whole community,” Mr Woodhead said.

“This is a model that could be followed by urban and rural landowners, as well as developers planning subdivisions,” he said.

ORC councillors and executive staff held the regular council meeting in Alexandra last week, and held a ceremony at Jolendale honouring the Mannings.

“The Otago Regional Council thanks Jolyon and Enny for their selfless work as stewards of the Otago environment and on behalf of the people of the region, we extend our gratitude,” Mr Woodhead said.

Mr Woodhead presented Mr Manning with a framed certificate and citation acknowledging his passionate advocacy for the environment.

Mr Woodhead said Mr Manning had been an assiduous and prolific submitter and contributor to ORC planning processes over many years and council welcomed the thoughtful and constructive nature of his submissions. 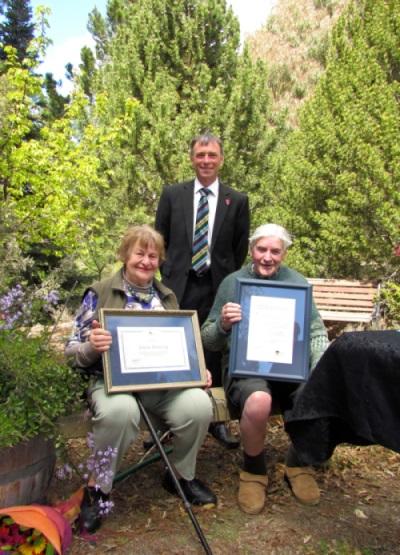