Work on the latest stage of the Leith flood protection and drainage scheme is progressing well, and has marked a major milestone.

New steps have been installed which give access to the river and views of the university, including the historic clock tower building, and landscaping has begun in the project’s southern section.

“This is one of Dunedin’s most significant engineering projects, with long-term benefits for the people of Dunedin,” Dr Palmer said.

“Works are currently on track for completion of this stage in mid to late October,” he said.

Around $5 million has been budgeted from the 2014/15 ORC Annual Plan for the section between Dundas and St David Streets, with the full programme of scheme enhancements due for final completion in 2018/19.

In times of heavy rain the Leith has to transport large flows of water. This has resulted in several damaging floods in Dunedin since European settlement. The work aims to increase the flood-bearing capacity of the scheme so that the risk of flooding on adjacent land is reduced.

ORC has a long term commitment to limiting the effect of flooding on the city, and planning work is proceeding on the next section of the river to have flood protection enhanced, Dr Palmer said. 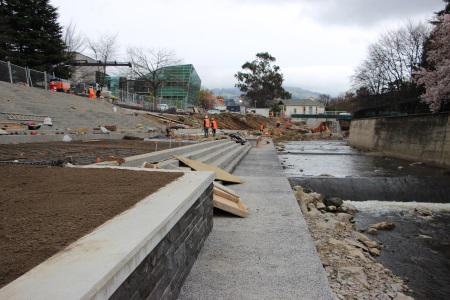