A large example of a native fish – the banded kokopu – was found in Smiths Creek near Broad Bay on the Otago Peninsula during a recent Otago Regional Council (ORC) field day focussing on water quality in peninsula waterways.

ORC scientist Pete Ravenscroft – who said the kokupu (a whitebait species) was the biggest he had seen in his 20 years of monitoring the fish – gave locals the chance to see and learn about the numbers, sizes, and ages of native fish in small waterways on the peninsula, where many important native species are found.

ORC teamed up with the newly-formed Hereweka Harbour Cone Trust (HHCT) to help local landholders ensure that good water quality is maintained in streams on the peninsula.

Established under a memorandum of understanding with the Dunedin City Council, which owns the 328ha property, the trust is responsible for its day-to-day management as well as long- term planning and project development. It has eight members – two representing the City Council and six representing the community.

ORC manager community liaison and education Nicola McGrouther said farmers attending the field day learned how to watch out for potential impacts on waterways from their farming, including the effect physical works might have on waterway values.

Mrs McGrouther said because sediment is the primary killer of native fish in streams, it was crucial that all farmers acted to reduce sediment input into waterways.

Landowners discussed possible solutions to minimise these inputs such as restoration planting, and soil management.

The community groups have been doing riparian planting, fencing, freshwater monitoring, and education on the property to help keep stock clear of waterways and reduce the environmental impacts of farming. 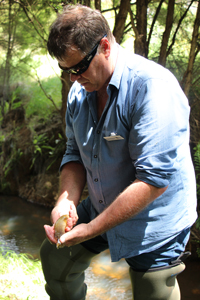 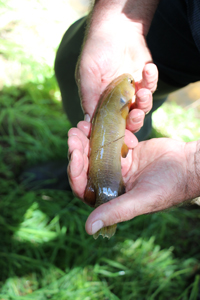 ORC scientist Pete Ravenscroft   The kokopu close up.
with the banded kokopu he
found in Smiths Creek