Farmers in the Pomahaka River catchment in southwest Otago who have banded together to improve water quality in their area were recognised last night at the Morgan Foundation-sponsored annual NZ River Awards in Wellington.

The Pathway for the Pomahaka project was joint winner with Wairarapa Moana in the Story category of the awards, in which there were eight river stories from around the country. A video of the Pomahaka story is available at http://www.lawa.org.nz/get-involved/news-and-stories/otago-regional-council/2015/november/the-new-zealand-river-awards/#story

The Story category judge, Listener senior writer Rebecca Macfie, said the Pomahaka stood out for several reasons: the scale of catchment and therefore the project, the range of farmers involved (intensive dairy, sheep and beef, and deer), and the commitment of the group to restoring the health of their river.

Otago Regional Council chairman Stephen Woodhead congratulated the Pomahaka farmers on their success in the river awards and said their story was a compelling one, demonstrating the power of local communities deciding to take responsibility for sustainable management of waterways in their backyard.

ORC has been working with farmers in the area for over a decade and had contributed funding towards setting up the current project.

Mr Woodhead said the project is an example of a community being pro-active, showing real stewardship for improving water quality, and taking practical steps to bring it up to the new Otago Water Plan standards.

The NZ Landcare Trust started the Pathway for the Pomahaka initiative in 2013, bringing farmers and stakeholders together to develop a catchment plan, focussing on ways to improve water quality.

Since then these farmers have been modifying their land management practices in response to water quality monitoring results in the catchment. They are also aiming to reduce their contaminant discharge from runoff, leaching and drains, using the Otago Water Plan limits as the benchmark for their water monitoring.

Some of the original participants in the Pathway to the Pomahaka project formed their own Pomahaka Farmers Water Care Group. They each began monitoring water quality in the area. So far 250 farmers in the catchment have shown interest in being a part of the project.

“I know those farmers already working hard in the Pomahaka would like to see even more of their neighbours supporting the collective effort they are making to do their own water measuring and testing,” Mr Woodhead said.

“They are an example to others in Otago and are actively leading the way to ensure that achieving good water quality throughout the region becomes a reality,” he said.

Pathway for the Pomahaka co-ordinator Janet Gregory said the Pathway for the Pomahaka project’s focus is on education, whether that involves one farmer talking to another over the fence about grazing their gullies and hollows last, or emailing others about upcoming field days on topics such as fertiliser use and efficiency, or effluent storage and management.

“They're also teaming up with stakeholders from the dairy, sheep and beef, and forestry sectors and local schools, making this a genuine effort to reach out to the wider community to bring about improved water quality,” she said.

Mr Woodhead said it was clear the great work by many people in the community would gradually translate to improved water quality in waterways, which was the goal of the Otago Water Plan.

Note to editors/chief reporters: Otago has had considerable success at the awards. Last year Dunstan Creek – the largest of the Manuherikia River’s tributaries – was the most improved Otago waterway based on measurement of dissolved reactive phosphorus (DRP) at the Beattie Road monitoring site.

At the same awards Dunedin teachers Andrew Innes and Simon McMillan were finalists in the NZ River Story Award for their work with Otago University scientists to produce rigorous water testing procedures for school students.

At the inaugural awards in 2013, the Shag River in East Otago was named most improved river, while the Waikouaiti River was placed third. 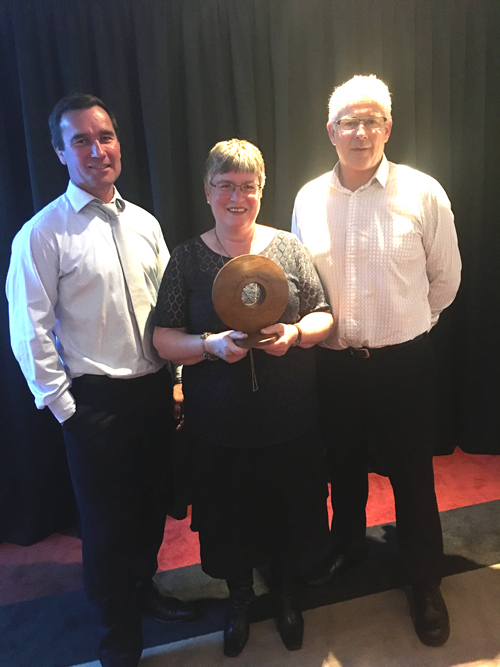 Pathway for the Pomahaka representatives (from left) Simon O’Meara, Janet Gregory, and Lloyd McCall, with their award in Wellington last night.