The presence of the potentially toxic algae Phormidium has been confirmed in the lower Cardrona River.

This has prompted the Otago Regional Council (ORC) to warn dog owners to be vigilant when exercising their pets alongside Otago’s rivers and streams and stop them from eating any scavenged material.

The warning comes as warm weather post-Christmas causes river levels in Otago to drop. Phormidium occurs naturally in waterways, but can become a problem in summer when the algae can form thick mats on river beds, especially during low flows.

However, warmer temperatures since Christmas and the resulting stable flows meant Phormidium has the opportunity to flourish, certainly in the Cardrona, and possibly in other historic trouble spots such as the Lindis, Manuherikia, Taieri (Silverstream), Kakanui, and Waianakarua rivers.

“It is important that people using waterways are aware of the risks associated with its possible presence, and are alert to this wherever they are in Otago,” Dr Olsen said.

Some cyanobacteria produce toxins that are a possible health risk to humans and animals if eaten, and they can also cause irritation to the skin and eyes. Phormidium mats can indicate that other cyanobacteria posing a risk to human health may also be present. People are advised to avoid contact with waterways where the mats are present. If anyone becomes unwell after contact with affected waterways, they are advised to see their doctor.

There have been cases in New Zealand of dog deaths associated with toxic algae where dogs have eaten the mats formed by Phormidium, having been attracted by their deep earthy odour.

The mats can detach from the river bed and accumulate along the water’s edge where it is readily accessible to dogs. Dogs seem to like the smell of Phormidium and should the material be toxic at the time it is ingested, severe poisoning, and often death, can result in dogs that are particularly sensitive to the toxins.

“If the bed of a river is covered in thick dark brown or black mats that have a velvety texture and a musty smell, it is wise to be cautious and avoid that river site,” Dr Olsen said.

Pets should be taken to a vet immediately if they show signs of illness after coming into contact with algal mats. The greatest risk is to dogs, which are more likely to consume the mats in the water.

“The most common signs that a dog might have consumed toxic algal material are lethargy, muscle tremors, fast breathing, salivation, twitching, paralysis and uncontrolled shaking, convulsions, or frothing at the mouth soon after being in the water.”

Anyone concerned their pet may have consumed toxic algae should contact their vet immediately, he said. 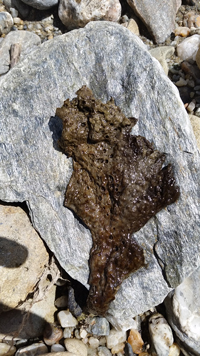