As readers may be aware, Otago Regional Council has been working through plans to construct a central city bus hub in Dunedin by mid-2018. Last week, hearings took place – an important step towards being able to proceed.

The planned hub will make transferring easier for Dunedin bus-users. With an intended location of Great King St,
between Moray Pl and St Andrew St, it will form the heart of the new Dunedin network, which underwent route and timetable changes in September.

Although there are presently bus stops in the central city (city stands), they’re not easy to transfer between. To transfer in the city at the moment, it takes planning ahead and cross-referencing on which stand you’ll arrive at and depart from, and a walk from one to the other. 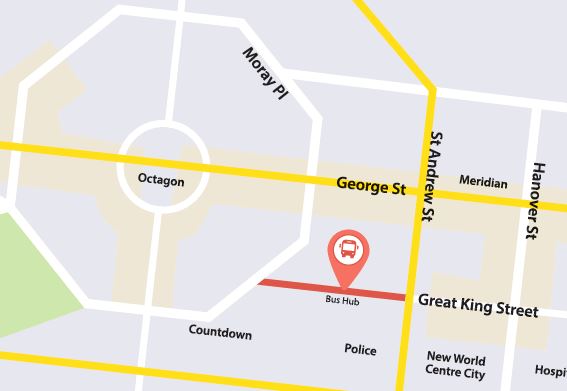 Having a bus hub in a designated location will make transferring as easy as jumping off one bus and getting straight onto another. Almost all urban services will travel through the hub, so passengers can easily transfer between services, accessing the whole Dunedin network.

The route and timetable changes made in September are geared to work best with the bus hub in place, and the current wait times experienced along the journey will be reduced for some services once they’re routed via the hub.

Ten bus bays are proposed as well as electronic timetables, public toilets, bike stands and new plantings. One of the key themes that emerged from the hearings was shelter. As the result of feedback from the hearings, some adjustments to the design, including extra shelter, will be considered at the next meeting of the regional council.

The hub may be adapted as public transport develops in the future, with further shelter and facilities provided to meet demand.