City bus hub to be completed this year

The Regional Council has announced the contractor and timeline for the central city bus hub.

The Otago bus hub, which will be situated in Great King St (refer attached map) is scheduled to be completed by contractors Fulton Hogan in November 2018.

“The hub is like a final piece in the puzzle of the network changes we’ve been implementing over the past few years,” ORC Chief Executive, Sarah Gardner said.

“The Transport Agency, as a key funder of public transport services in New Zealand, is delighted to have the site for the new Dunedin bus hub confirmed,” says Jim Harland, Director Regional Relationships, NZ Transport Agency. “A safe and comfortable place to catch your bus near the Octagon in all weather, is going to be a huge encouragement for people who may currently drive. This will be great for the Dunedin community, visitors to the city and people of all ages.”

The changes, first signalled in the 2014 Regional Public Transport Plan, have included significant increases in frequency, more direct routes, and the introduction of an orbiter-style service, the Ridge Runner.

Since the most recent changes made last year, total passenger trips have increased by 7% as compared with the same period in the year prior.

“One key benefit of the bus hub is increased connectivity,” Cr Trevor Kempton said. “Currently, there are seven different bus stops in the central city within a four-block radius. This makes it difficult for people to transfer between services. Having one central city service point for public transport will also allow less frequent users of the service to easily understand where and how to catch a bus.”

Construction on the hub was due to start very shortly, on Monday 16 July.

“We acknowledge that the timeframe between announcing the planned start of siteworks and commencing them is short,” Cr Gretchen Robertson said. “However, we’ve done our best to balance the need to give notice, with our undertaking to landholders and retailers in the area to be finished before the December Christmas trading period.”

Cr Gretchen Robertson said, “While there is no avoiding the fact that the construction period will be disruptive, the contractors will be working very hard to minimise any disruption and keep the overall timeline as short as possible”.

Siteworks would be round the clock with the highest impact works to be scheduled between 6.30pm and 6am. At least one lane of the road will remain open during daytime hours, and pedestrian access will be maintained to the local retailers and police station throughout.

Cr Kate Wilson, Chair of the Dunedin City Council’s Infrastructure Services and Networks Committee said, “We work closely with the Otago Regional Council to make sure the city’s transport network is well-connected and works for everyone. I’m delighted to see the bus hub getting to the next stage and the investment in a better public transport system.”

Where is the hub?

On Great King St, on the same block as the police station.

What will be at the hub?

There will be ten bus bays at the hub, with additional amenities including shelters, toilets, a café/kiosk and electronic signage with information about the service

How will we know details about disruptions caused by the siteworks?

Those with businesses or property adjacent to the site will be kept informed by Fulton Hogan. ORC will keep the public up to date via its website and social channels.

What else is coming up in public transport? 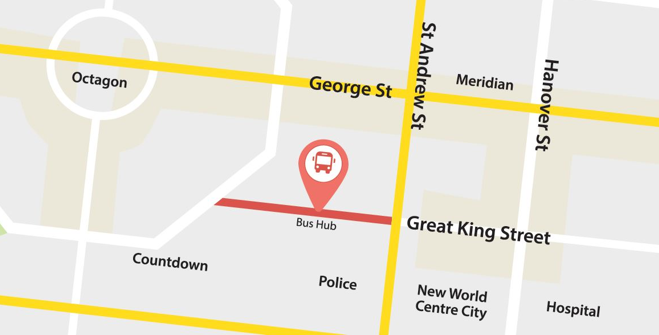