Cr Kempton, Chairman of the Otago Regional Transport Committee, said the new hub would be the heart of the bus network in Dunedin.

“I’m delighted to officially launch the Bus Hub. The hub is a key step in our Regional Public Transport Plan, and one we’ve been very much looking forward to. This couldn’t have been possible without the support and collaboration of the Transport Agency and DCC.”

Cr Kempton noted that Dunedin’s bus network had come a long way in the past five years.

“In the past, catching the bus hasn’t always been easy. Routes and schedules were much more variable, and transferring between buses often meant walking a couple of blocks. Route and frequency changes to date have modernised and simplified the bus service, and now the hub will make it even more convenient.”

Mr Cull said the DCC fully supports the new bus hub as a way to improve public transport in the city.

“If Dunedin is to grow sustainably and become a truly world class city, there will need to be a greater uptake of public transport. Having improved services and infrastructure is a great step in the right direction,” he said.

“Local and visitors can now look forward to better connected public transport journeys with most urban buses travelling via the new hub, making it simple for people to transfer between services. Dunedin is now in the great position of having a public transport system that is more appealing than ever as a way to move around the city.”

Earlier, Otago Regional Councillors caught a bus to the event, making them the first passengers to use the new hub.

Starting tomorrow, bus routes will redirect through the hub in stages. 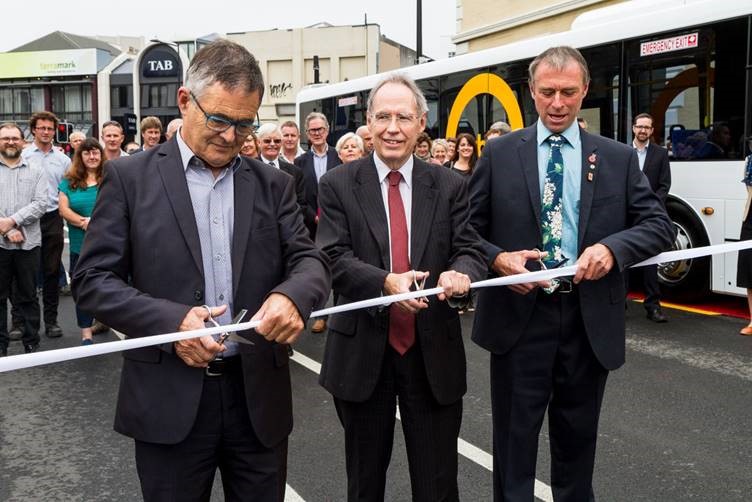