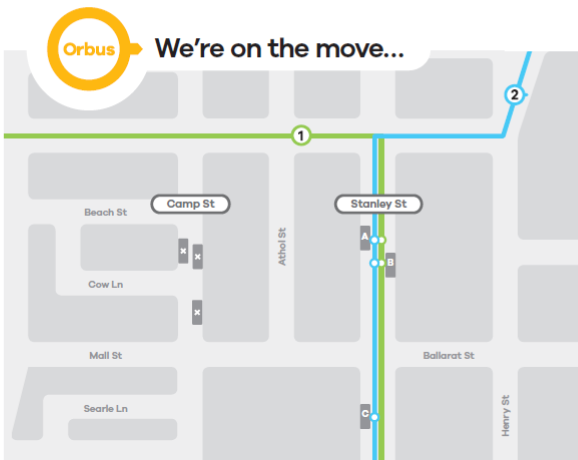 The opening of the new stops on Stanley Street to service the routes travelling via downtown has been a joint effort under the Way To Go partnership.

After four weeks of construction, the three existing Camp Street stops have been decommissioned and new stops have been opened two blocks over on Stanley Street, between Coronation Drive and Shotover Street.

There are new bus stops and shelters on either side of Stanley Street for Route 1 servicing Fernhill, Remarkables Park and Queenstown Airport, and Route 2 servicing Arthurs Point and Arrowtown via Frankton, plus an additional stop outside the courthouse for departures to Arthurs Point. The shelters have bins, bike and ski racks, a ticket and information service desk, security cameras and wayfinding signage.

The stops have been moved to minimise disruption for passengers during the O’Connells Mall upgrade. Existing Camp Street bus stops will revert to Loading Zones, benefiting those delivering passengers and goods in the Queenstown Town Centre.

Transport Agency Director Regional Relationships Jim Harland says the Transport Agency is pleased to support the project and believe the new stops will provide an improved level of service to locals and visitors.

“This is a very visible location which will further encourage use of the buses.”

“We’re pleased with the solution that’s been worked out with QLDC and the NZ Transport Agency to retain a central location for passengers.

“We are also pleased to be able to take this opportunity and upgrade the infrastructure, installing new bus shelters, a ticket desk, bins, bike racks and, unique to Queenstown - ski racks. We’ve also improved the map with feedback from our passengers.”

Since the Orbus network was launched in November 2017, there has also been steady growth in patronage (64%) compared to 2017/18. Orbus carried nearly 1.5 million passenger trips in Queenstown in the last year.

“As our district grows, so too does the need to provide more choices for people to get from A to B without having to rely on their car.  Public transport will play an increasingly important role in that and it’s vital we can provide facilities that meet the needs and expectations of the people using the service,” Mr Hansby says.