The team of six will now represent New Zealand at the finals in Australia later this year.

The Otago Regional Council (ORC) team were announced as the winners of the New Zealand leg of the JLT Australasian Management Challenge at the Taituarā – Local Government Professionals Aotearoa Gala Dinner last night.

The ORC team, “In Our Element”, competed in a day of scenarios and challenges in Lower Hutt last month, which tested their abilities across a range of local government functions against 14 teams from across the country.

“We were very surprised about the result and extremely excited. I think the whole team got a lot out of participating because it was so competitive, and all of the teams were really strong. I’m really grateful to my team-mates and mentors for all the time and effort that went into the Management Challenge.”

This is the third year that ORC has had a team competing in the Australasian Management Challenge, which is run by Taituarā, New Zealand’s national membership organisation for local government professionals.

“We are enormously proud of the team’s achievement, particularly as this is a national-level competition that tests their leadership skill and capability. We have a number of rising stars at ORC and enjoy facilitating their growth and seeing them explore opportunities like these.

“The skills and learnings gained will be brought back into the organisation and assist us to achieve for Otago moving forward. Congratulations to the team on their achievement!”

The team will now turn their focus to the finals in Australia later this year, against seven states and territories.

“Now we just have to get back to training to prepare for the next stage,” Miss King said.

ORC is grateful to Taituarā for hosting the New Zealand leg of the Australasian Management Challenge, and to staff both in and out of the team for giving up their time to help prepare. 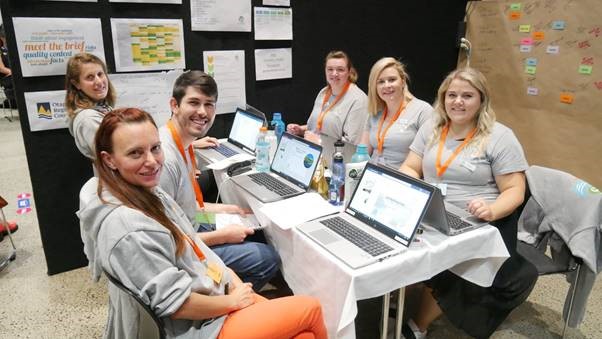 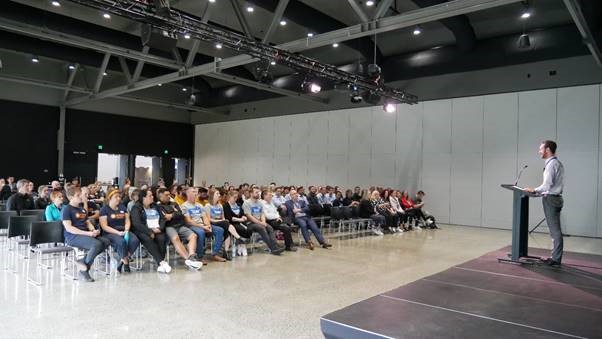 Competing teams at the end of the Australasian Management Challenge, being addressed by James Lord of Taituarā.