The name of the Otago Regional Council’s Harbourmaster’s new boat was unveiled today – the ‘Āwhina’ - at a ceremony at the Otago Yacht Club in Dunedin.

Āwhina; which means to assist or support, was put forward by Mosgiel-resident Valda Gardiner and was chosen from more than 300 community suggestions by a panel of ORC staff and Otākōu Rūnaka representatives.

Councillors and stakeholders attended a short naming and blessing ceremony this morning where ORC Chair Gretchen Robertson broke the traditional bottle of champagne over the boat’s bow. The ORC Harbourmaster’s new vessel was officially named this morning; Āwhina at a brief ceremony at the Otago Yacht Club. Edward Ellison, Upoko rūnaka of Ōtakou gave a blessing before ORC Chair Gretchen Robertson broke the ceremonial bottle of champagne over the bow. At right with a bouquet is Valda Gardiner, whose boat name was chosen from more than 300 entries.

Cr Robertson said the boat’s new name was a fitting accompaniment to that of her sister vessel, Kaitiaki, as both would serve the community by assisting and protecting those who spent time on Otago waterways.

The three-tonne 8.5m Rayglass Protector, which can carry up to seven people, arrived in Dunedin in mid-September, having been purchased from the Auckland Regional Council. 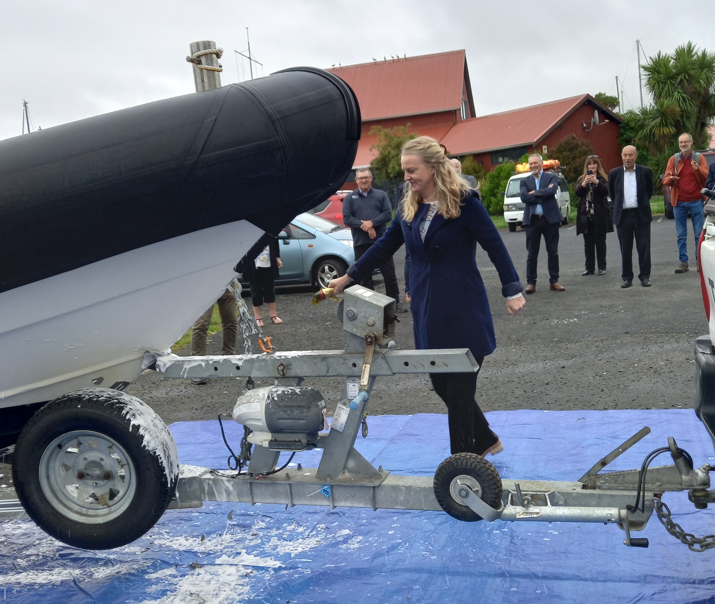 Cr Robertson says the Harbourmaster team is responsible for safety of navigation and has a serious care and protection role to ensure everyone using the harbour consider the safety of all.

“At its heart, this means assisting everyone to get home safe and sound,” she says.

ORC Harbourmaster Steve Rushbrook said he was “really happy” to have the name finalised.

“I’d like to thank the public for their input through our consultation, we had a huge response,” he says.

Mr Rushbrook said the new boat would patrol the Otago harbour and coast while the 7m long Kaitiaki would now patrol lakes and waterways around Central Otago.

The ORC is responsible for the regulation of ports, harbours, waters, and maritime-related activities in the Otago region under the Maritime Transport Act (1994).