Public interest has been high on the work of the Otago Regional Council’s hydrology staff’s use of helicopters to gauge the flows of the numerous North Otago waterways in flood during the past two days.

ORC’s Team Leader Monitoring Eve Bruhns says that yesterday three staff were in a helicopter, having left the Taieri aerodrome at about 8:30am and were out until past 3pm.

“At that time they had gauged the Waikouaiti, Waianakarua, Kauru and Kakanui (pictured) rivers, and were also looking to gauge the Shag River,” she says.

“Heli-gauging is cheaper, faster and more accurate than any other method used worldwide,” Ms Bruhns says.

As was the case yesterday, it is often the only possible option when it comes to accessing a region which is inundated by flood water, she says.

State Highway 1 at the Waikouaiti bridge (pictured) area was closed yesterday until 4.30pm. 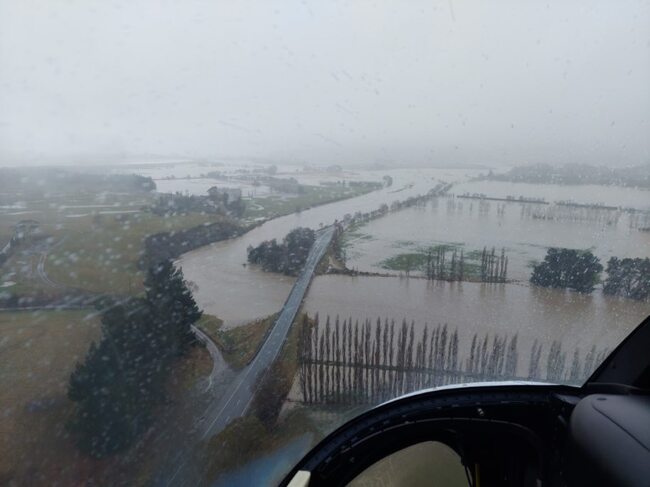 The flow rate of 470 cumecs (cubic metres) that was recorded in the Waikouaiti river at about 9.45am yesterday was not exceptional, she says.

Similar flows have been previously recorded around the Waikouaiti, most recently, in July 2017, November 2018 and January 2021. A flow of approximately 550 cumecs was recorded in January 2021.

While the ORC was taking photos during the flight between gauging sites, Ms Bruhns says they were not specifically looking for damage of river banks and public infrastructure.

However, ORC’s Engineering teams have been carrying out inspections assessing how infrastructure and flood banks performed in recent days.