Otago Regional Council and Environment Canterbury are encouraging people to report wallaby sightings, as part of efforts to control these animals, regarded as serious pests.

Signs have been erected along the two region’s borders encouraging anyone who has seen a wallaby to report their sighting to the national website www.reportwallabies.nz so the relevant council can investigate. A follow-up search of the area is undertaken by contractors who control any wallaby found.

Wallabies are considered a pest under both council’s Regional Pest Management Plans due to the harm they cause to biodiversity and productive land. Canterbury has a containment area for wallabies that includes 900,000 hectares of land in South Canterbury, centred in the Hunter Hills, but including the Two Thumb Range, the Kirkliston and the Grampian ranges. In Otago, wallaby is listed as an eradication species, and all efforts are focussed on the complete removal of wallaby from the region in the medium term. For this plan to work, both councils need support from the public to report any sightings outside of the Canterbury containment area, including the whole of Otago.

Environment Canterbury Wallaby Programme Leader, Brent Glentworth said the signs have been put in place in key high traffic areas surrounding the containment area to target travellers who may not be aware of the animal’s pest status as they travel outside of that area.

“As well as looking out for the animals themselves, anyone out and about is also encouraged to look for signs of wallabies such as footprints or droppings,” he said. 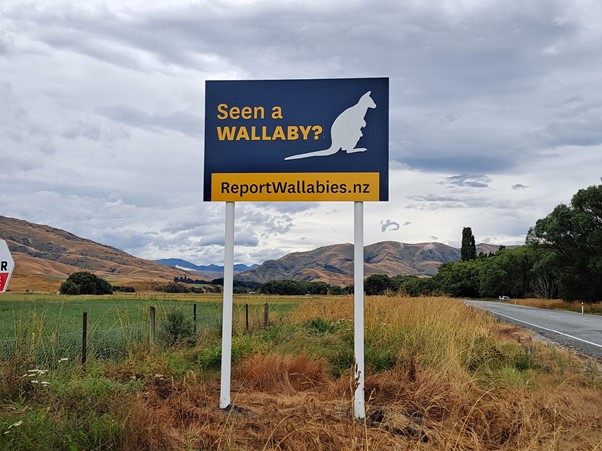 A Report Wallbies sign on the roadside in Otago, heading towards the Lindis Pass. 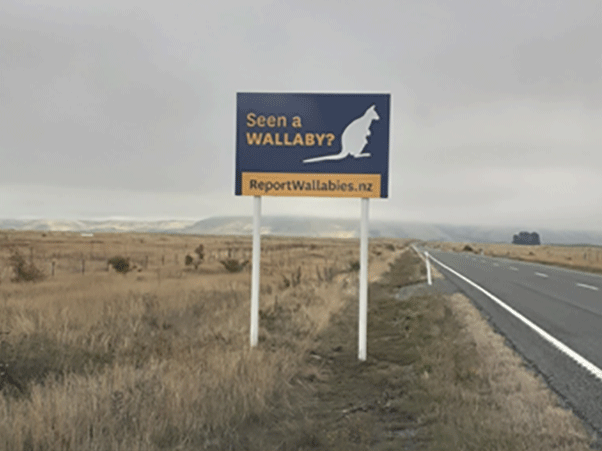 One of the new signs on the roadside in Canterbury near Omarama.

The two councils work together as part of the National Wallaby Eradication Programme which has provided $27 million worth of funding over four years nationally to reduce and contain populations of wallabies and boost regional employment opportunities, delivering environmental and economic benefits.

Environmental Implementation Manager Andrea Howard says that while Otago has relatively low numbers of wallabies, it’s extremely important that any wallaby sightings are reported, to enable contract teams to search and destroy any wallaby present and prevent breeding populations from establishing in Otago.

A female wallaby can have one joey developing in her pouch while also carrying another fertilised embryo ‘on hold’ until the joey is no longer dependant on her. This means that a single female could stem a breeding population.

If left unchecked, they could spread to over a third of the country over the next 50 years.

What to do if you spot a wallaby

Reporting the wallaby is a way everyone can help protect our environment and treasured biodiversity. The public can report any sightings of wallabies anywhere in New Zealand to www.reportwallabies.nz.