Residents in Palmerston and other towns north of Dunedin are making plans to use the new weekend bus service after Otago Regional Council announced the start date of 28 May.

The decision followed a consultation with the Waikouaiti Coast Community Board during which they identified what would best suit the community.

“The community is very happy about now having a start date for the weekend bus service,” said Alasdair Morrison, Waikouaiti Coast Community Board chair.

“We’d like to thank Otago Regional Council for working with us to ensure we are getting a service that suits the needs of the community. This means that families can head into town on a Saturday or Sunday for sports games or shopping and won’t have to worry about parking. Feedback indicates that the service will be well utilised in the coming months.

“At the moment the return trip costs $2 which makes it the most economical way to get into town.”

Doug Rodgers, Transport Manager, said, “The Waikouaiti Coast  community have been actively engaged in developing a solution that works for them and we are pleased to be able to help them out. We have received a petition from the Palmerston community which may result in additional improvements to the route.”

“On Saturdays, we are adding four services from City to Palmerston and three from Palmerston to City and, on Sundays, passengers have the option of two services each way.”

The new weekend service will be 100 % funded by ORC and will depart Palmerston early on both weekend days, following the normal route.

The current route 1 service operates from Monday to Friday with three services to the city and back. It is aimed at morning commuters, school students and afternoon commuters. The service goes through Waitati, Karitane and Waikouaiti.

The new service, starting Saturday 28 May, runs to the timetable as shown below.

You can download the Palmerston weekend bus timetable here. 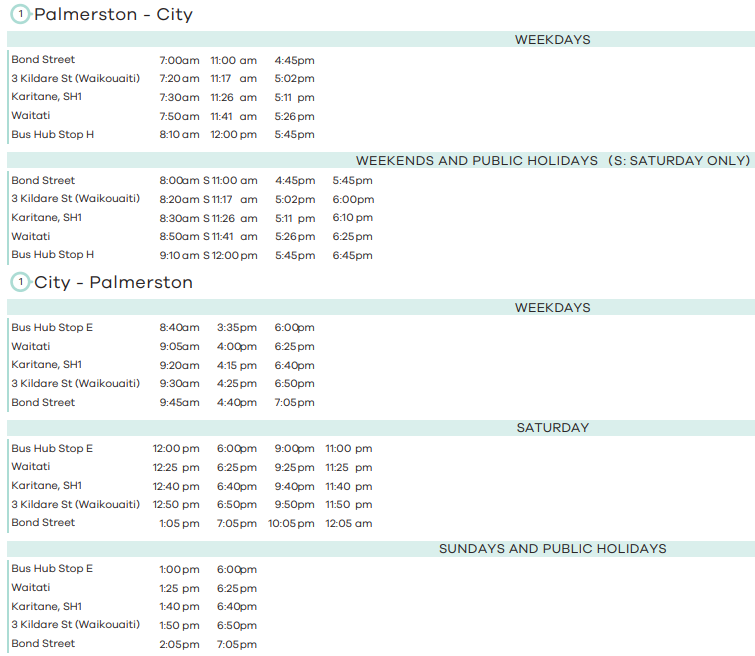