The recently established Upper Clutha Wilding Tree Group aims to control wilding trees in the wider Upper Clutha area, with the Otago Regional Council helping it get off the ground.

Wilding conifers are a significant problem in Otago, smothering native vegetation, reducing stream flows, increasing the risk of wildfires and changing the landscape from tussock and native shrubs to an evergreen tree-dominated environment.

“It’s great to see another group join the fight against wildings.”

One of the biggest problems of wilding tree spread is that wildings increase the intensity of wild fires. In 2018 there was an out-of-control fire on Mt Maude above Lake Hawea and local residents had to quickly evacuate their homes.

Mt Maude resident Di Kenton, who has since joined the Upper Clutha Wilding Tree Group, says she couldn’t believe how quickly the fire spread. “It was like watching a dynamite trail being lit.” After Ms Kenton and her animals were evacuated along with other residents on Mt Maude, the fire was managed with helicopter monsoon buckets collecting water from Lake Hawea, and local volunteer fire crews on the ground.

She says had the fire started a few hours later in the evening, the choppers wouldn’t have been able to fly and given the prevailing wind, the fire could have been a lot worse.

Ms Kenton had already been removing wildings from her property, and since the fire has removed the final five hectares over concerns around further wildfires and the progressive southern spread of wildings through to Maungawera and down the banks of the Hawea River. 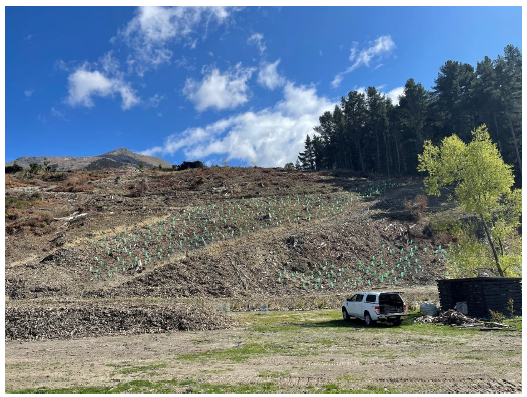 Wanaka resident Arne Cleland is clear that action is required urgently. “We have an opportunity to get on top of this problem, within the Upper Clutha if we take action now. If we allow the existing trees to start producing seed, the problem will compound dramatically. Any delay will add significantly to the cost and make control even more challenging."

"Wilding trees will not only change how our place looks, they will alter the ecological processes in the landscape. These trees have the ability to eventually cover any hill you can see from Wanaka and Hawea if left unchecked."

The Group’s facilitator Rob Phillips says they are currently mapping wilding infestations and developing a plan, setting out the areas to control, priorities and timeframes.

“Cost-effective surveillance and control of wilding conifers is achievable if we act now,” says Mr Phillips.

“Without intervention, wilding pines will continue to spread. If action is delayed, the impacts of wilding conifers and control costs will increase exponentially.

The group is working with central and local government, and with other community groups in advocating for ongoing funding to deal with the problem both in the Upper Clutha and elsewhere in Otago.

Under Otago’s Regional Pest Management Plan, wilding conifers (introduced conifer trees which have self-seeded and are growing where they are not wanted) are identified as pests requiring progressive containment.

Find out more about plant pests in Otago.