We identify areas at risk of flooding from rivers and lakes around Otago. This information is then made available on our natural hazards database. 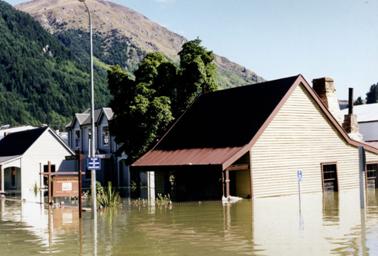 The mapped flood hazard areas in the Otago Natural Hazard Database show land which is at risk of inundation due to flood events in rivers and lakes. For some locations (e.g, the Tokomairiro Plain) it may also include flooding due to surface runoff via ephemeral overland flow paths. It does not include flooding due to overloading of the urban stormwater network, or inundation associated with coastal processes such as storm surge or tsunami.

In addition, flood extents are only shown for areas where this hazard has been documented and investigated – the flood hazard area does not cover sections of some rivers and lakes where the we don't not hold sufficient information to accurately assess flood hazard.

The extent and location of flood hazard can vary considerably during each flood event, due to variations in tributary flow and sediment supply, and the changing geomorphology of the surrounding environment.

There is a range of other information and documents which provide relevant flood risk guidance. In particular, a document entitled NZS9401:2008 Managing Flood Risk – A Process Standard (the Flood Standard) which provides an agreed best practice for individuals and agencies, including local government agencies and communities, to ensure that proper consideration is given to all aspects of flood risk when making decisions. Also relevant is a document entitled Managing Flood Risk, Draft New Zealand Protocol . This document provided the context for the Flood Standard, and provides a framework through which better flood risk management decisions can be made.

If you're keeping a close eye on rivers and rainfalls, this page may help you find what you're looking for. Read more