Feral deer are considered pests under our plan in site-led programmes in Dunedin. Although deer are a very important resource for hunters, they aren’t ideal in areas with high biodiversity values like in our site-led programmes. They eat large amounts of native seedlings and saplings which means there are less of these woody and herbaceous plants around for native animals that like to hang about in these habitats.

Feral deer are medium to large-sized ungulates (large mammals with hoofs). They vary quite a lot in size from a small fallow doe (female) weighing in at about 40kg, through to the larger wapiti stag (male) weighing in at up to 450kg! Red deer have a reddish-brown coat (hence the name), while wapiti are chestnut brown with a distinctive cream rear end (or rump if we’re talking in steak terms). Fallow deer have coats of varying shades of brown. 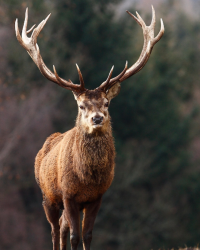 Under Otago’s pest plan, feral deer are only classified as a pest in the site-led areas; Otago Peninsula, West Harbour/Mt Cargill, Quarantine Island and Goat Island. See our site-led programmes page for more on what this means.

The goal is to stop feral deer from establishing themselves in these areas.

ORC will take a lead role in supporting the goals of community groups and agencies in site-led areas in relation to feral deer. This may be through advice, education, funding, service delivery or requiring landowners to undertake control when needed.