Feral goats trample on and eat indigenous ecosystems. Even in low numbers, their impacts on forest and scrublands can be serious. They prevent regeneration of seedlings by eating saplings, changing the make-up of these ecosystems. This means that there is an increase of plants that they don’t like the taste of, and some places have been turned into grassland.

Feral goats don’t have many impacts on landowners like farmers, although they may occasionally compete with sheep for feed, and they have a wide range of parasites and diseases in common with sheep. They can’t roam very far and they are controlled relatively easily.

Feral goats are a similar size to sheep, with short hair, pointed horns and a beard. They can be white, black, brown or a combination of these colours. The males are usually larger than females. Their hooves have pointed, slightly incurved tips and their eyes are greenish blue. They are social animals, spread out slowly and, like most of us, don’t really like to cross large rivers, unless there’s a bridge nearby. This means they are spread out in patches. However, if the conditions are right they can have lots of kids which means their population can double in size every year. Their most common cause of death is by hunters but their kids can be prey for feral pigs.

Under Otago’s pest plan, feral goats are only classified as a pest in the site-led areas; Otago Peninsula, West Harbour/Mt Cargill, Quarantine Island and Goat Island.

The goal is to stop feral goats from establishing themselves in these areas.

ORC will take a lead role in supporting the goals of community groups and agencies in site-led areas in relation to feral goats. This may be through advice, education, funding, service delivery or requiring landowners to undertake control when needed. 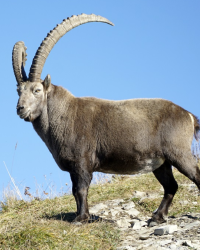