Stoats are only considered pests in the site-led programmes in Dunedin. They have contributed to the extinction of some native birds and are also a major cause of the decline of many other native birds. They kill more prey than they need for food if given the chance and attack animals much larger than themselves. They were introduced into New Zealand in the 1880s to control rabbit numbers.

Stoats (part of the mustelid family) have long, thin bodies with smooth pointed heads and their ears are short and rounded. Males can grow up to 30cm long and are usually larger than females. Their fur is reddish-brown on their back with a white to yellowish underbelly. Stoats have relatively long tails with a distinctive bushy black tip. 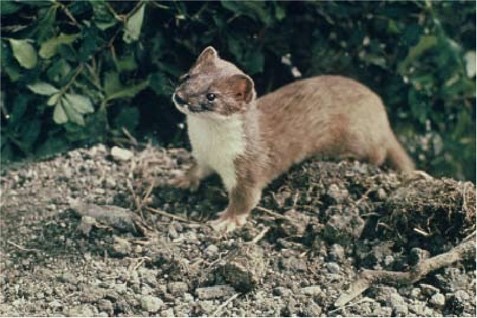 Under Otago’s pest, plan stoats (referred to as mustelids) are only classified as a pest in the site-led areas; Otago Peninsula, West Harbour/Mt Cargill, Quarantine Island and Goat Island.

The goal is to assist communities to progressively control stoats in these areas to prevent or improve on damage to the indigenous ecosystem values at these sites.

ORC will take a lead role in supporting the goals of community groups and agencies in site-led areas in relation to stoats. This may be through advice, education, funding, service delivery or requiring landowners to undertake control when needed.

Trapping is the main method for mustelid control.

Predator Free New Zealand has advice on their website on trapping best practice and backyard trapping.