We need your help to get rid of this pest. Report any wallaby kills or sightings through this form or by calling us at 0800 474 082.

We’re not talking about the Australian rugby team (although some New Zealanders may think they’re a pest too); the Bennett's wallaby were introduced to South Canterbury in 1874, and by the 1940s became a significant pest. Wallabies have the potential to significantly impact on the Otago economy and local biodiversity values and become a burden for future generations should feral populations become established.

It’s predicted that the economic benefit to the South Island by controlling the wallabies is over $23.5 million every year. If we don’t take action now, the cost to our economy will escalate to around $67 million within 10 years (Review of current and future predicted distributions and impacts of Bennett’s and dama wallabies in mainland New Zealand, MPI March 2016).

Find out more about wallabies and management in our guidebook. 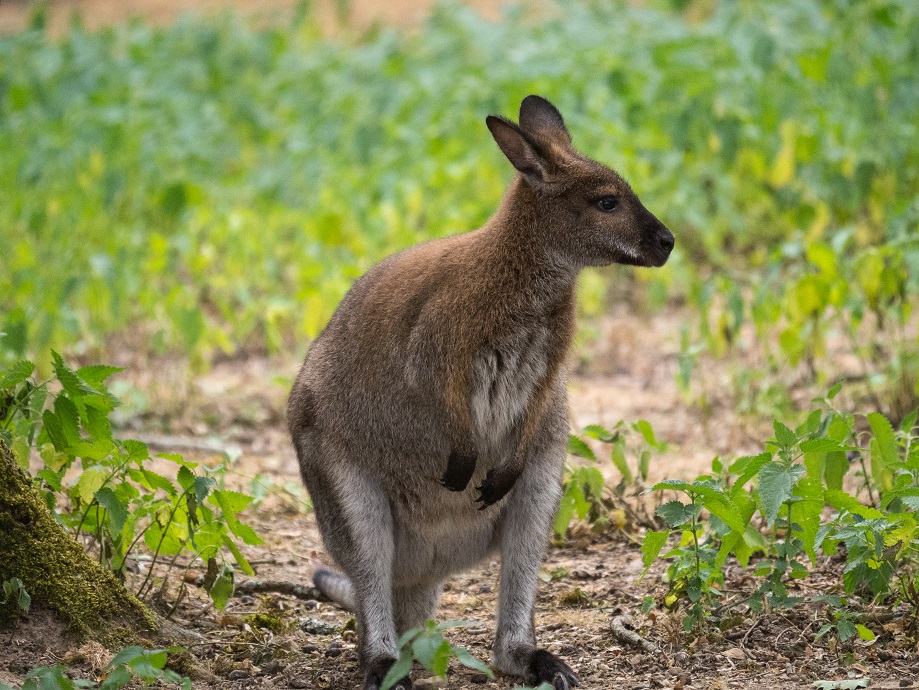 This programme aims to reduce the infestation level of the subject, or an organism being spread by the subject, to zero levels in an area in the short to medium term.

Bennett’s wallaby, often called red-necked wallaby, is a marsupial (a mammal that carries its babies in a pouch) that stands up to 80cm with a tail length around 62cm. Males can reach over 20kg in weight with females reaching 14kg. They have a greyish-brown upper body, pale grey chest and belly, and reddish-brown colour on the shoulders. Their hind feet and tail are black tipped.

Footprints and scat (poo) are a couple of ways you can look for signs of wallabies.

If you’re looking for footprints, usually only the main two toes of each foot leave a print. Prints are always in parallel pairs and can be two or more metres apart when wallaby are moving at speed. Sometimes you can see a tail drag mark in soft ground or snow.

The scat comes in all shapes and sizes. It is often pelleted and found in clumps; usually coarse in texture with vegetation fibres visible, but during spring flush or when feeding on Lucerne the sign can be joined.

Feral cat scat can be similar in shape to wallaby but can be ruled out by the strong smell (if you’re brave enough to give it a whiff) that comes from cats eating meat, and often fur, scales or other animal fragments are visible.

A wallaby sign during the winter months is seeing discarded cotton daisy (Celmisia spectabilis). Wallaby are known to pull the whole blade but only eat one bite of the soft base and leave the rest.

Wallabies usually tend to go out on their own and can breed from about 24 months old. They are elusive, nocturnal, solitary animals that feed in the open at night and seek cover during the day. A female wallaby can have one joey developing in her pouch while also carrying another fertilised embryo ‘on hold’ until the joey is no longer dependant on her. This means that a single female could actually mean a breeding population of three! 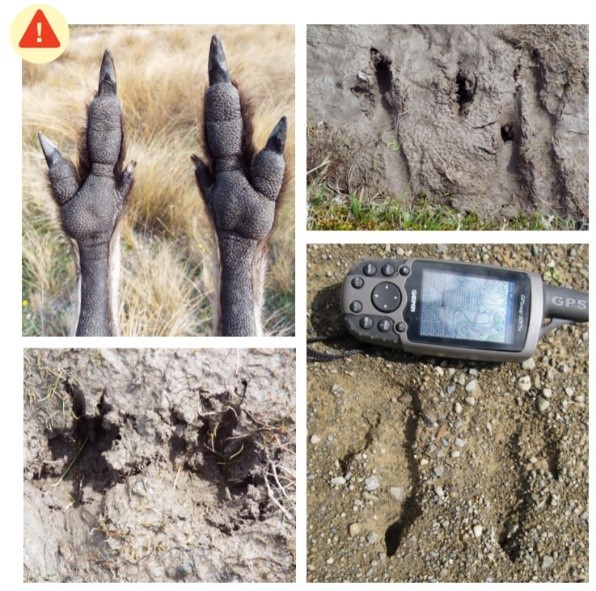 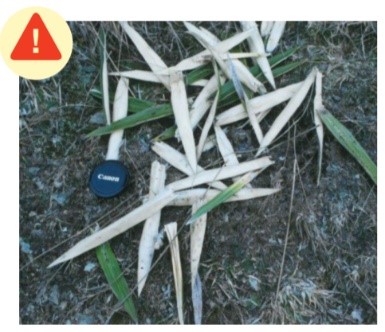 These three rules are to prevent wallabies from becoming established in the region and causing negative effects on economic and environmental values.

There is one rule for wallabies that applies to the site-led areas, which is that no one can keep, hold, enclose or otherwise harbour wallabies in any place, either in transit to or present in these areas.

Control is a shared responsibility between ORC and land occupiers. This will allow flexibility in designing the most effective and efficient control mechanisms to be used.

Shooting is the most effective form of control. Poison (using striker bait) is the best option for large numbers.

Occupiers are required to control Bennett’s wallaby on their land where this can be undertaken quickly and effectively. We understand that this can sometimes be difficult due to their range and low population numbers in Otago. So, if you see a Bennett’s wallaby, but you are not able to destroy it, you must report the sighting immediately to ORC. We will then either support you in destroying the wallaby or undertake the control works ourselves.

Where are they most common?

Well, Australia’s the obvious answer here but in New Zealand outside of the Otago region, Bennett’s wallabies occupy approximately 450,000 hectares of land in South Canterbury, centred in the Hunter Hills but including the Two Thumb Range, the Kirkleston and the Grampian mountains. Populations also occur in Kakahu Forest near Geraldine and Pioneer Park south-east of Fairlie. However, despite the efforts in Canterbury to contain this species within that region, ingress into North Otago has occurred.

This map shows areas in Otago and some areas in Canterbury outside of the containment zone where wallabies have been spotted as of May 2022. 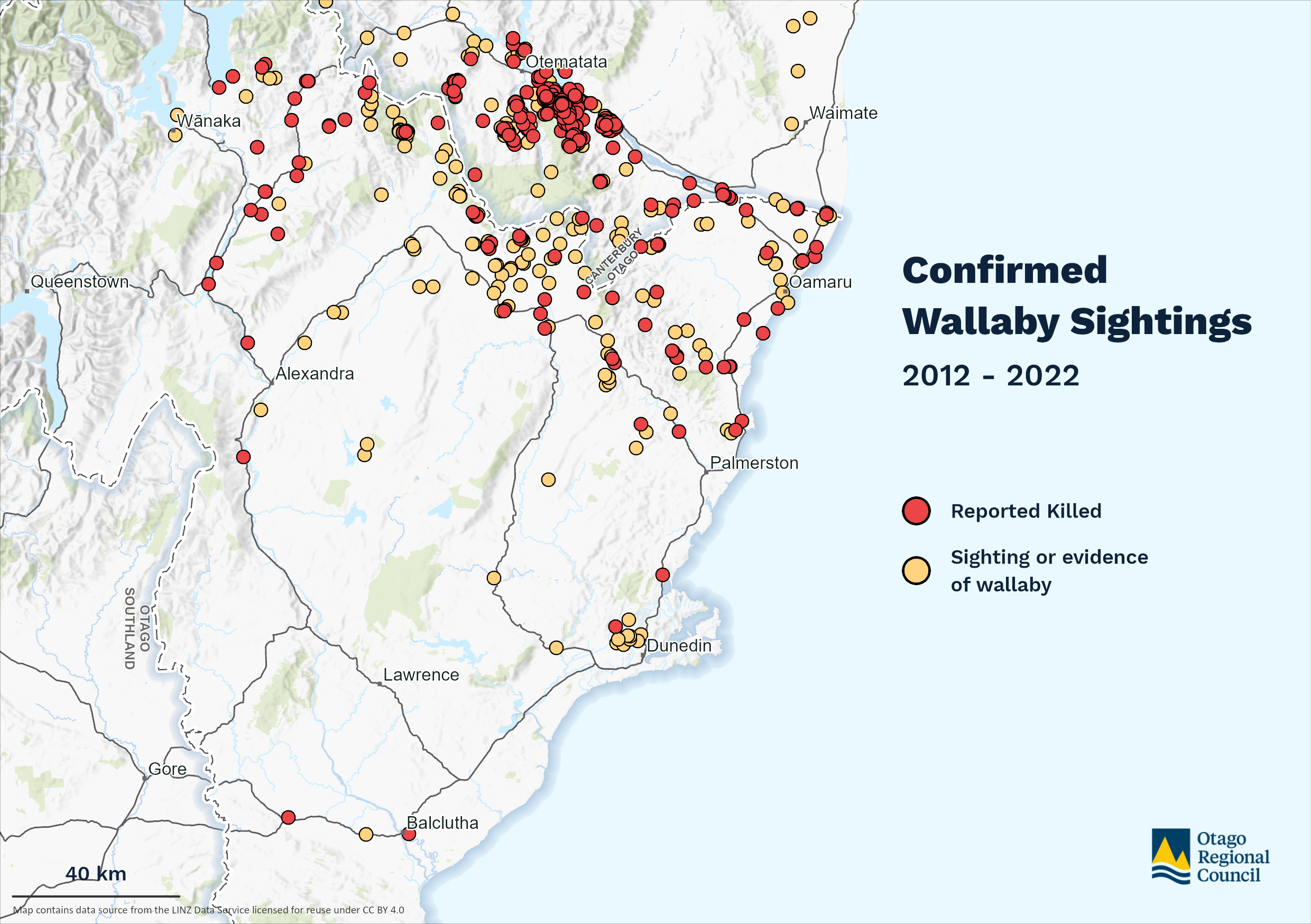 The below video is a digital flyover view of wallaby sightings in Otago and Canterbury from 2012 to 2022.

Land occupier – An occupier is the person who physically occupies the place, the owner of the place and any agent, employee, or other person acting or apparently acting in the general management or control of the place. For example if you are renting a house owned by someone else that does not live on that property, you are the occupier. You can see more about the responsibilities of occupiers (including owners) in 3.3.1 section 3.3.1 of the pest plan. 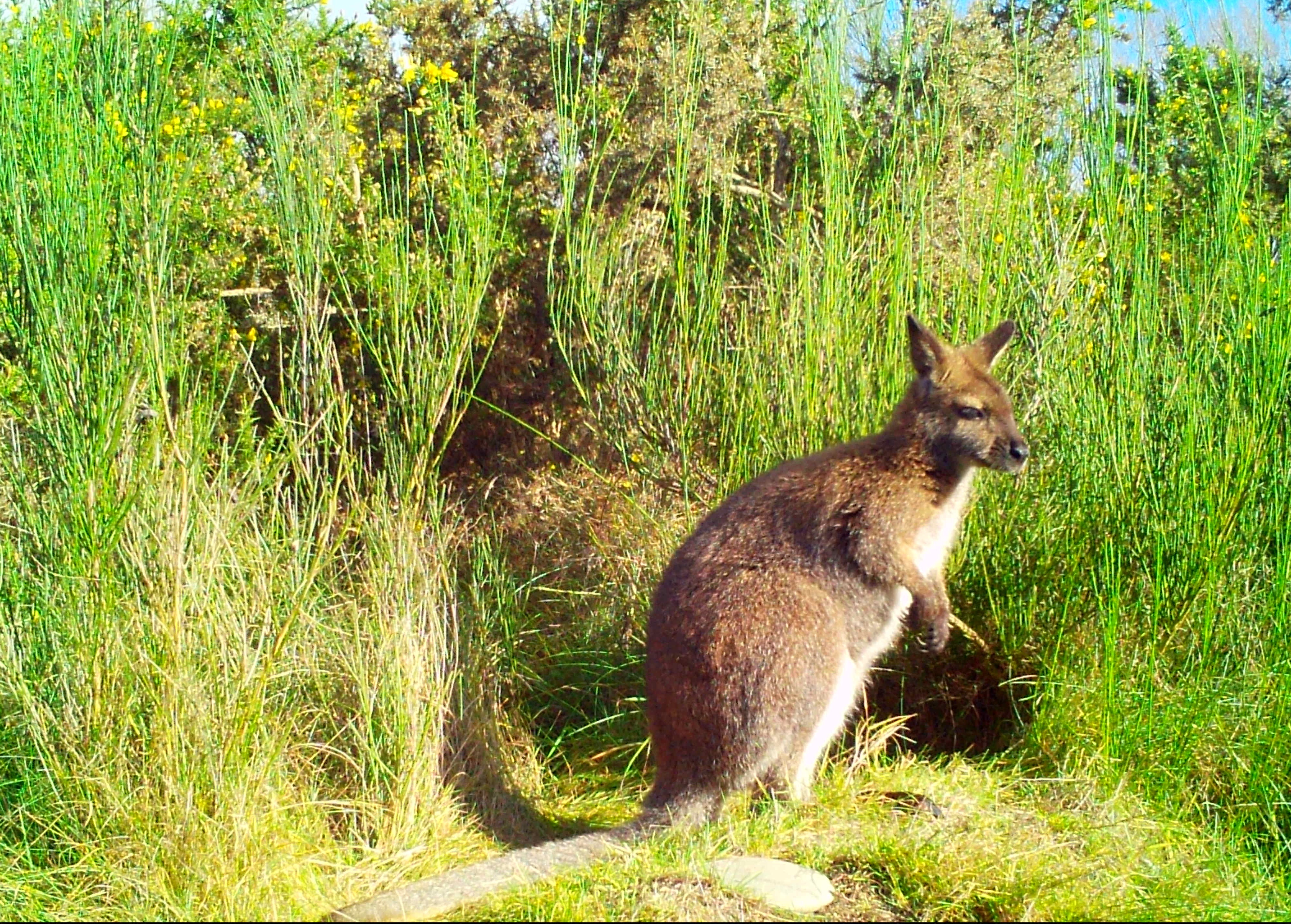 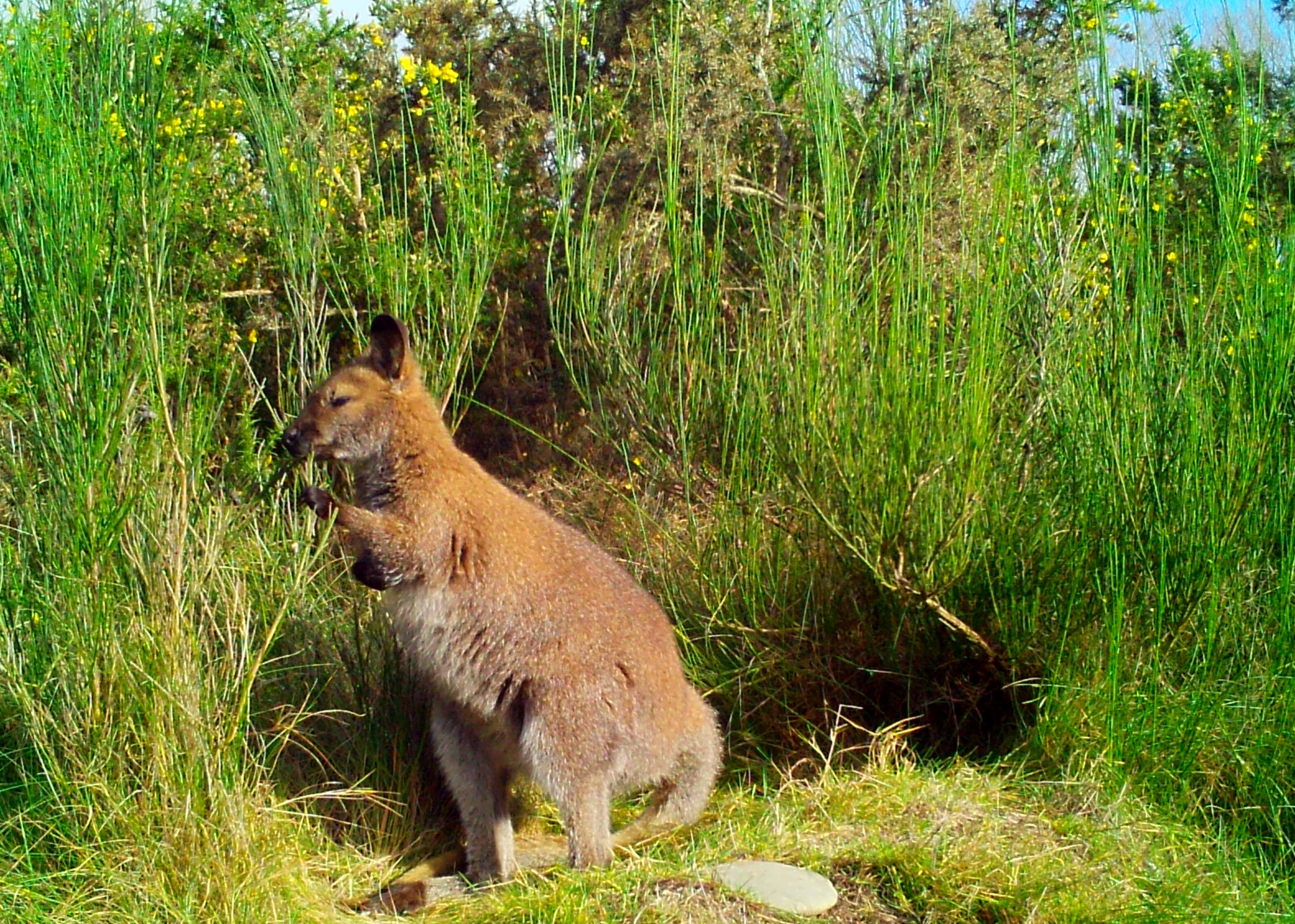 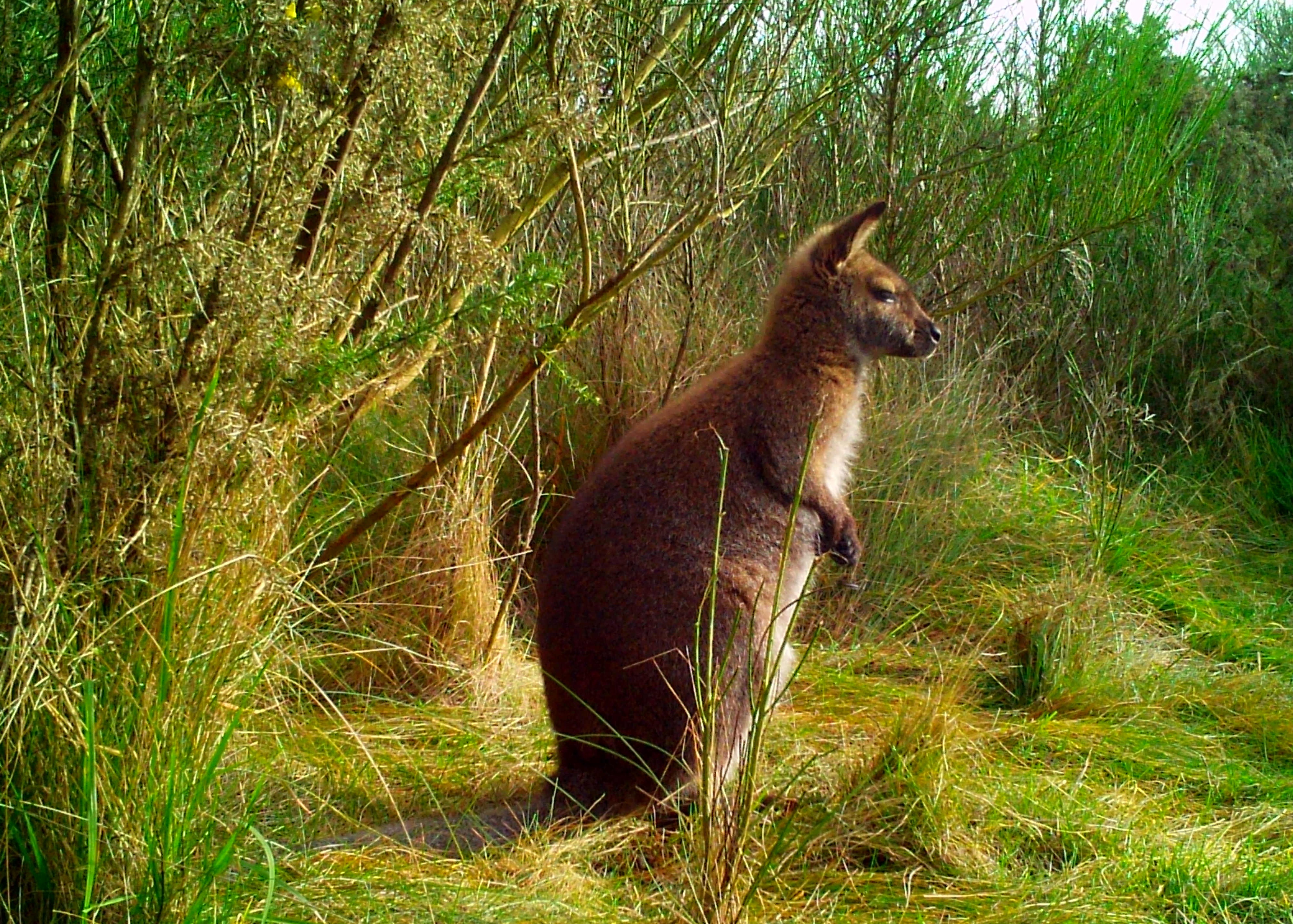 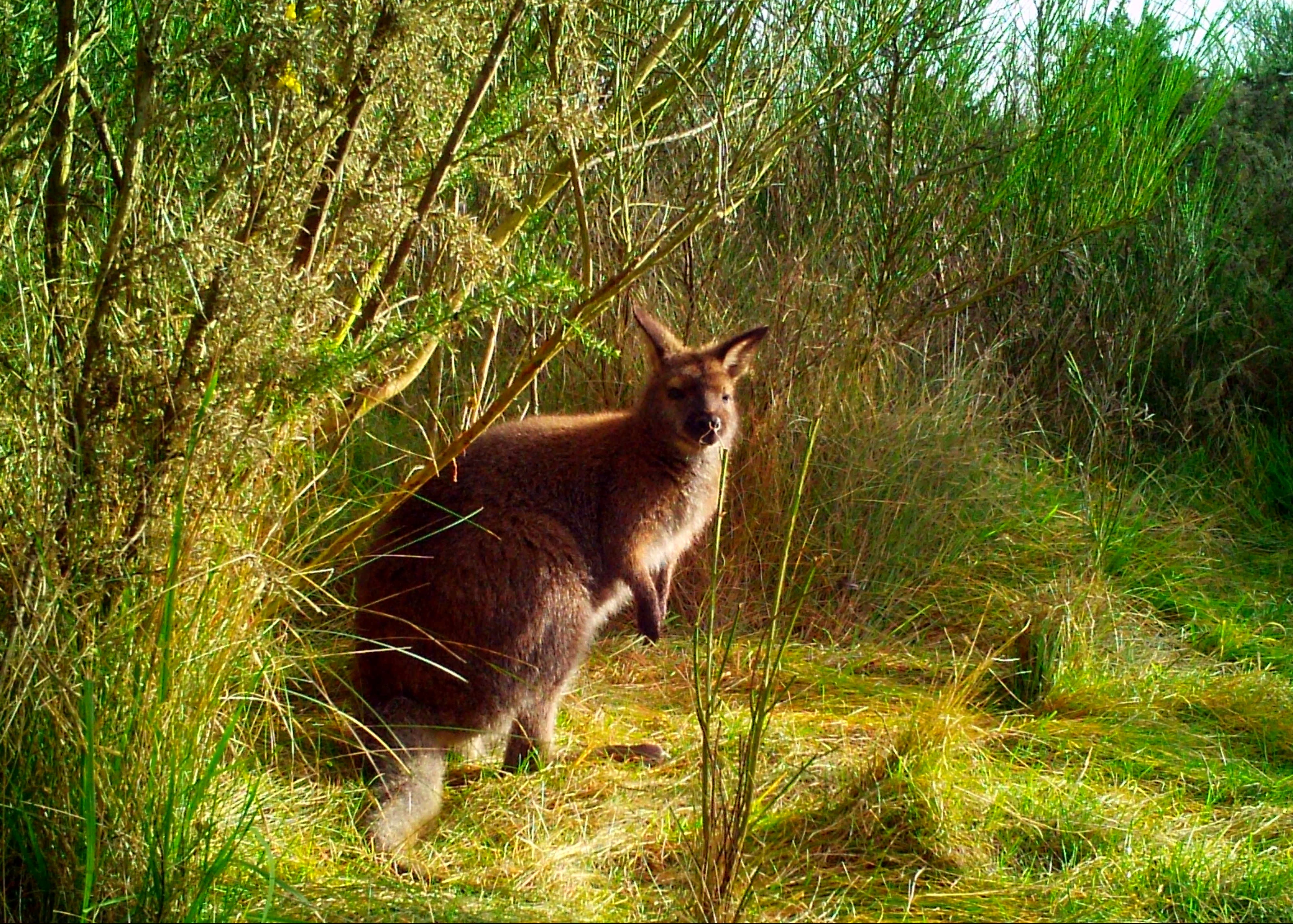 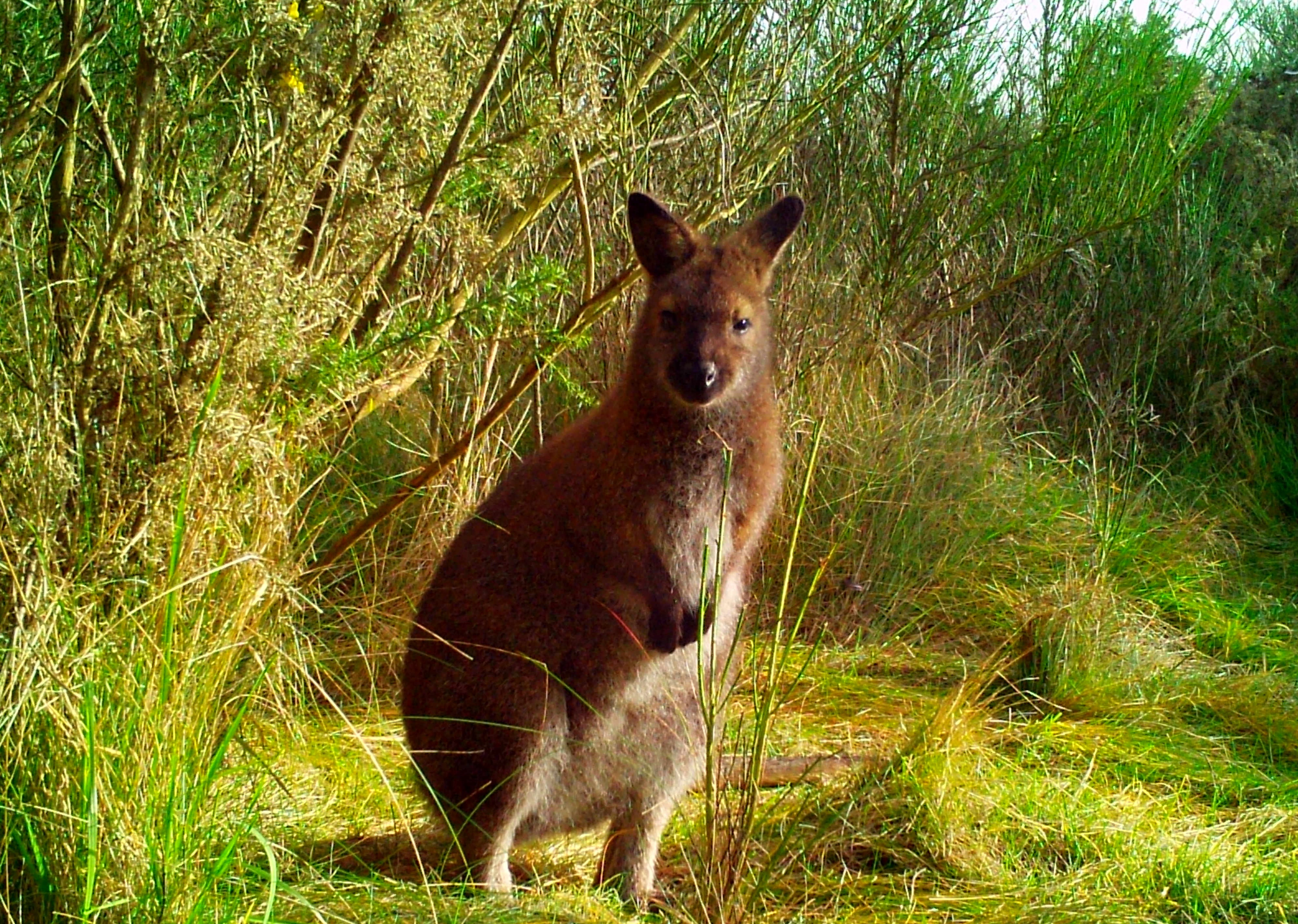